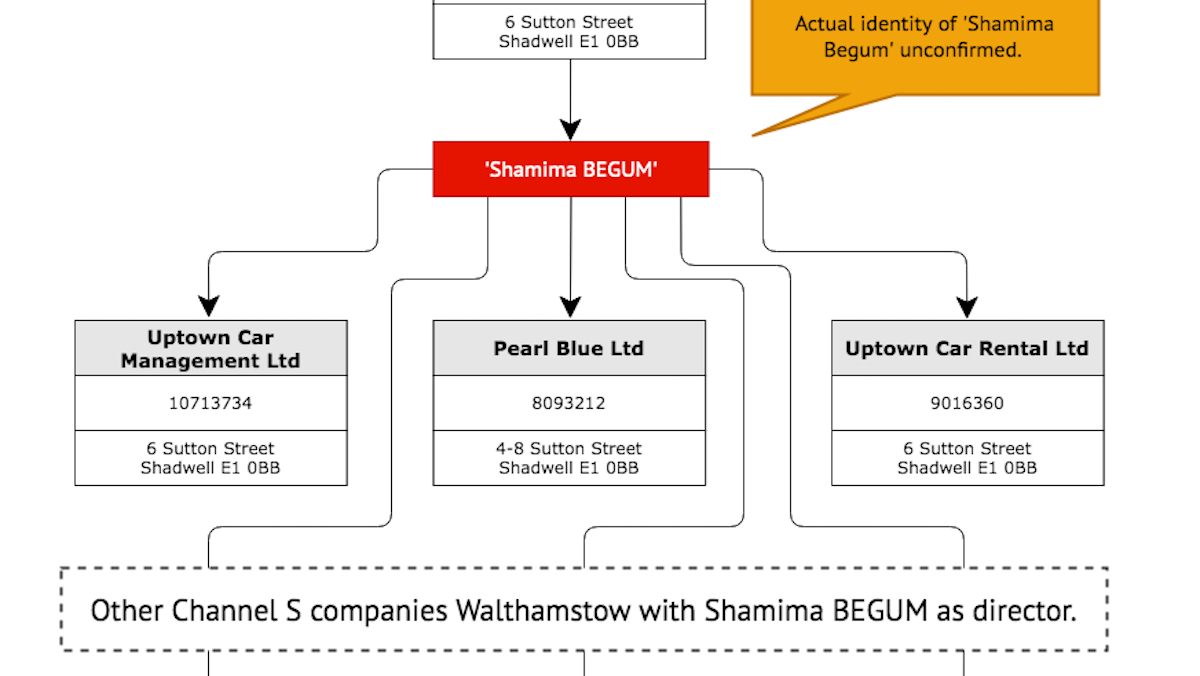 Last week the Enquirer revealed that our dear Mayor, John Biggs, was attempting to sneak a lease extension for Sutton Street Depot in Shadwell through Cabinet.

We use the word ‘sneak’ for the very good reason that in advance of the meeting Tower Hamlets Council refused point blank to tell us (and therefore you) who the tenant was.

No name of the tenant in the online document, nothing nowhere.

However the Enquirer had been very reliably informed that the new tenant was none other than Bangladeshi language media company Channel S.

Which was very interesting indeed! See the previous story to see why.

Should just mention that we have no evidence whatsoever that Channel S or its associated companies has done anything wrong at all. Who would refuse a gift horse, especially when you don’t need to check its mouth?

A Great Believer in Things Unless It’s a Bit Awkward

Here’s a clip of the moment that the big reveal was made in Cabinet.

So who is Pearl Blue Holding when it is at home?

Fortunately the Wapping Mole absolutely loves these sorts of challenges and hardly had he finished his popcorn than he was digging away.

Moles favouritest place to dig is the wonder that is Opencorporates where all sorts of secrets are hidden.

You can read the record for Pearl Blue Holding here. The only interesting thing is that it has a sole director who is called Shamima Begum.

Of course she is.

The Enquirer knows the real identity of this person but for legal reasons we cannot publish it.

Quite happy to tell the Metropolitan Police if they are interested? I mean that is a crime, right?

‘Knowingly or recklessly delivering information or making a statement to the Registrar of Companies that is misleading, false or deceptive’
Source: Kingsley Napley

Mole spent some time digging his way all the way from Pearl Blue Holdings to the many, many companies that are Channel S. You can see the results below. Interesting, innit?

This is by no means comprehensive and remember that Moley always lists both current and former director of companies. Very useful.

Mole does in fact own a Magical Corporate Network Tracking Machine created in Python which does all sorts of useful things.

But let us not do the geek thing.

The Enquirer is of the opinion that our initial belief that for some reason wanted to keep the fact that he was doing a nice deal for his Channel S mates on Sutton Street Depot quiet.

That didn’t work out well did it Mayor?

There again compared to the other stuff Mole has… which he would be writing if he was not distracted by this!

Or the other two stories he has about general weirdness (ok, blatant corruption) going on in Tower Hamlets Council which has the sole aim of benefiting the few at the expense of the many.

Actually make that three blatant corruption stories, Mole just reminded me of another one.

Then there is the very big one. Well, five of them. Enough to fill a book we reckon.

And the story about the, er, person who somehow has a huge amount of cash and can buy a thingy outright. Huh?

And there are the other ones from before the 2018 election which should probably be aired too, don’t you think?

If you want Moley and the Enquirer to publish these corruption stories sooner rather than later then please consider moving some cash from your pocket to ours ‘cos we do all this nonsense for free.

We asked the question below in our previous Sutton Street Story and we ask them again now.

Questions To Be Asked Again