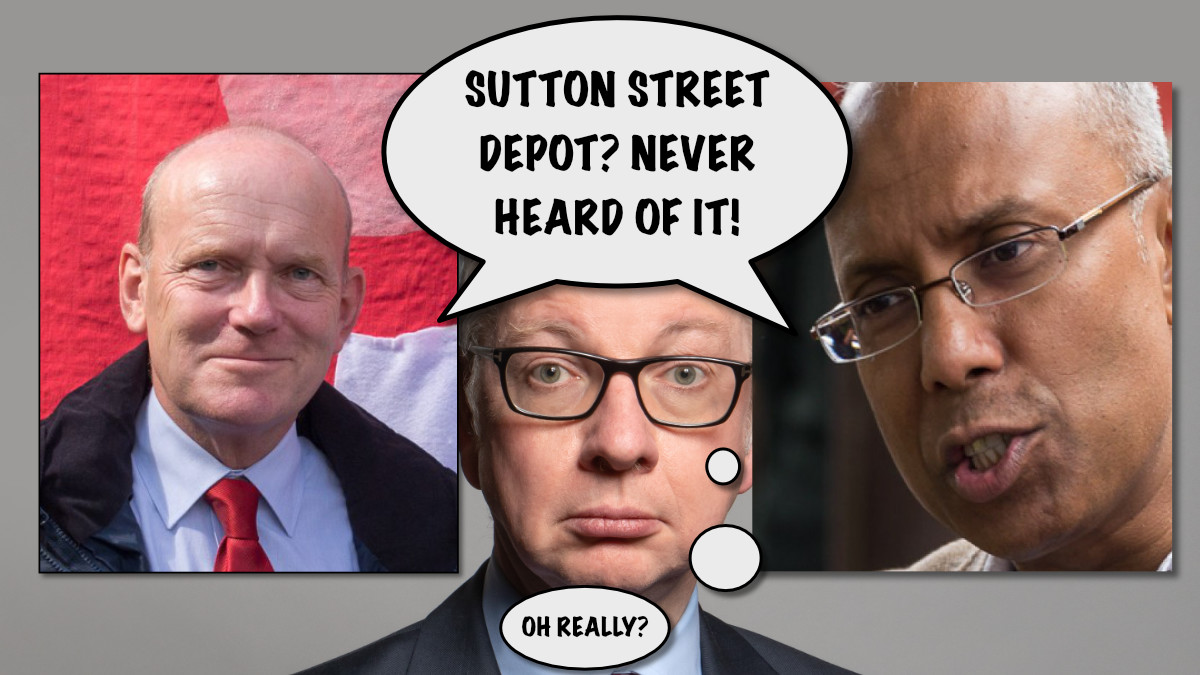 “Corruption, as it is defined by the World Bank, is a form of dishonesty or a criminal offence which is undertaken by a person or an organisation which is entrusted with a position of authority, in order to acquire illicit benefits or abuse power for one’s private gain.”
Source: Wikipedia

The Enquirer can exclusively reveal that Tower Hamlets Mayor John Biggs is attempting to secretly push through a favourable property deal for Bangladeshi language station Channel S TV ahead of next years local and Mayoral election.

The new lease for the Sutton Street Depot in Sutton Street E1 is due to be decided at full Cabinet this Wednesday 22nd September 2021.

The tenant is not identified anywhere in the document or any related documents. Not a mention. Which is more than a little odd don’t you think?

The Enquirer questioned Tower Hamlets Council three times as to the identity of the tenant with no success.

Eventually we were sent this five-line email.

Hello Mark,
Thank you for for your email.
Sorry, we are unable to assist with this query.
Kind regards,
Communications

Short, sharp and not at all to the point. But better than being ignored.

The official comment from Tower Hamlets Council does confirms one of two things.

As (2) seems the likely option the question is then what is so politically sensitive about this tenant?

The Sutton Street Depot was one of the properties at the centre of the 2014 investigation by government auditors PricewaterhouseCoopers (PwC) into the administration of Lutfur Rahman.

The final PwC document which was instrumental in the downfall of Rahman, Best Value Inspection of London Borough of Tower Hamlets Report, can be found here, paragraph 2.77 onwards is the section relating to the Sutton Street Depot. Here is a flavour.

The Enquirer can also reveal that in October 2018 Love Wapping (forerunner to the Enquirer) was made aware of allegations that in advance of the Tower Hamlets Mayoral Election held on Thursday, 3rd May, 2018 various deals were done by the Labour administration of Mayor Biggs including an arrangement to extend the lease of Sutton Street depot for Channel S.

A lack of time and resources prevented us from pursuing this further so our information has been languishing on one of our many hard drives all by itself lonesome.

But it all makes sense now.

Those living outside the borough should realise that Bangladeshi language media companies such as Channel S can be hugely influential, especially in advance of an election, as their output can directly influence the voting intentions of our Bangladeshi community.

Or to put it another way, if you are a politician and you do not get good coverage from one of these companies you do not stand much chance of winning an election.

The borough is already in the run up to the local and Mayoral elections in May 2022.

Despite neither the Mayor, Ann Sutcliffe or any senior council officers considering it is in their interests to identify the mystery tenant the new lease seems quite generous. Here are the basics.

The document by Ann Sutcliffe, Corporate Director of Place who is in charge of all things property, seems to say that the tenant’s previous lease for the Sutton Street Depot expired in June 2018.

The tenant has been covering business rates and security costs during this time.

The Council is of the opinion that the proposed rent of £125,000 a year which the tenant has agreed to pay ‘represents best value for the Council because it provides an income for an otherwise disused building’.

The reason why was it not possible for £375,000 or so of rent to be generated since June 2018 is not addressed. This would be better value.

On expiry of the previous lease in June 2018, the Council did not seek possession to recover the property and the tenant remained in occupation (well, their security guards did).

The document goes on to state that ‘the tenant has been in occupation since June 2018’ (just their security guards?) and that the Council is seeking to recover rent for this occupation. Only £80,000 has been agreed with the tenant, not the approximately £375,000 or so unpaid.

Despite all this Tower Hamlets Council still thinks this tenant is the best tenant it can get for the Sutton Street depot.

Just to further sweeten an already sweet deal the mystery tenant will also benefit from an initial 12 month rent free period subject to it getting agreed work on the premises done.

The alternative option to this deal would be for the Council to seek vacant possession and re-letting the space.

And that’s it. There is only one other possible clue as to the real nature of this deal at paragraph 4.1 (Equalities Implications) which says ‘The future redevelopment of the market site will require planning consent, which will involve consideration of issues such as affordable housing, access and employment opportunities.’

Market site? What market site? Anyone know? hello@eastendenquirer.org if you do!

The Council admits (paragraph 6.6) that ‘on first appearances’ it does not go fully towards meeting the Council’s income targets but that not entering into the new lease arrangement would result in zero income for an unknown period so the deal is recommended.

Again this neatly sidesteps the zero income from the site since June 2018. Or maybe those three years just did not count for some reason?

Remember that in Tower Hamlets anything is possible.

There are several similarities between the 2021 Sutton Street Depot lease and that uncovered by PwC in 2014. See the large screen grab at the bottom of the page and have a look for yourself.

And the identity of mystery tenant is…

After the original PwC audit report was published it was revealed the Lutfur Rahman administration had organised a lease for Sutton Street for well known local character and convicted criminal Mahee Ferdous Jalil aka Mohammed Mahee Ferdhaus.

According to his Wikipedia entry (which is a must read) Mr Jalil has numerous convictions for money laundering, conspiracy to defraud and insurance fraud and in 2014 was banned from being a director of a company for ten years.

During Lutfur Rahman’s term as Mayor Mr Jalil was the owner of Bangladeshi media organisation Channel S. In return for the beneficial lease terms for Sutton Street Channel S reported favourably on the Lutfur Rahman administration and so influenced voting in the borough.

Channel S is currently operating from Prestige House in Walthamstow. The controlling company of Channel S is Chs.Tv Limited according to the Channel S website although this is a non-profit organisation.

The Enquirer has been informed by a very reliable source that the mystery tenant for Sutton Street Depot is Channel S .

Mr Jalil is not mentioned as a director on the Channel S website although he does seem to have his own chat show.

The Enquirer has contacted Channel S for comment relating to the new tenancy at the Sutton Street Depot.

Questions To Be Asked

Probably lots of other questions too, but far too many for a Mole to investigate. Maybe the Metropolitan Police Service should get involved? Just a thought.