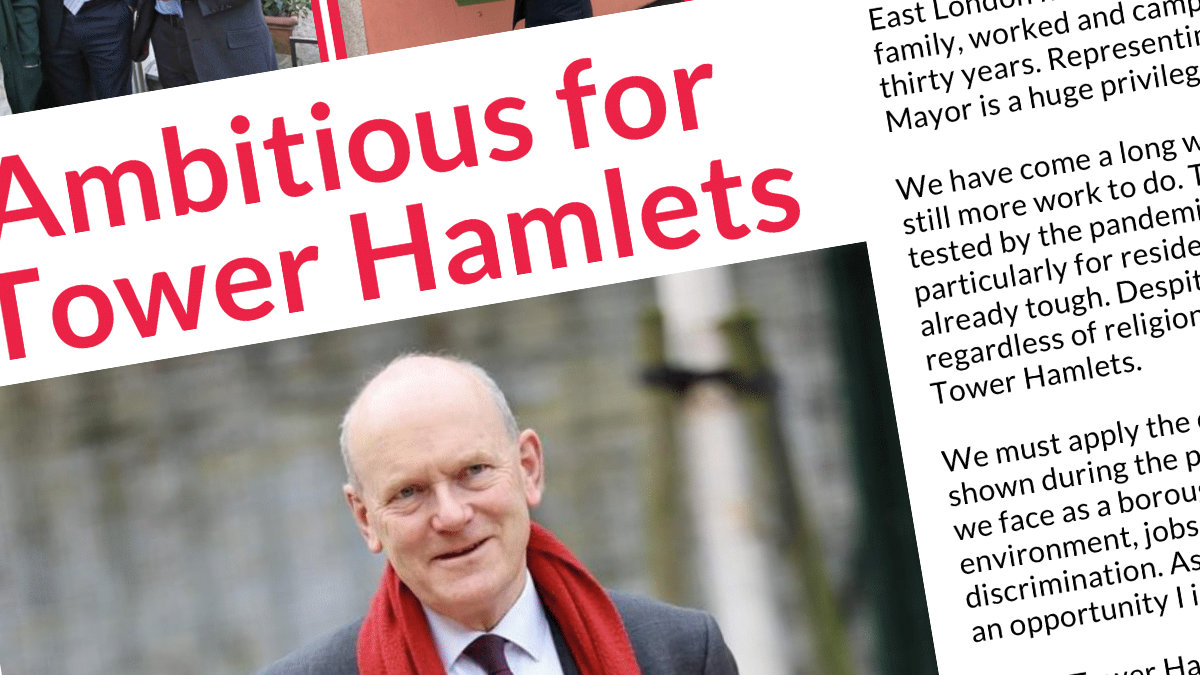 Here we go….No sooner had we published our ‘Whitechapel Labour triggers open selection’ story than we were informed of some odd events last night.

Tower Hamlets Labour? Odd events? Who would have thunked it?

The precise details are very tricky to pin down so our Political Department will have to do their best.

In Tower Hamlets Labour Party there are 18 branches, two women only branches and one BAME forum. (We try not to use the term BAME anymore but that is what is called.)

Once a trigger ballot is, er, triggered by one branch as Whitechapel did last night then all the 21 branches vote either for or against John Biggs being the official Labour Executive Mayor candidate.

The first faction to win 11 of the 21 branch votes wins the day and either John Biggs is the official candidate or he is not.

In addition to the Whitechapel branch vote last night should also have seen a vote by the Tower Hamlets Labour Party BAME Forum.

But that did not happen.

No snogging on the stairs!

As Tower Hamlets Labour Party is, at best, a basket case it’s every move is monitored by the Labour Party NEC (National Executive Committee) and if the NEC do not like what they see they jump in and take charge, just like parents at an adolescent’s birthday party.

This is what happened last night as Amy Fode, Regional Director at Labour South East was one of two London region observers who turned up and stopped the Tower Hamlets Labour Party BAME Forum from meeting as it had been decided by the NEC that a branch cannot be geographically based.

Odd that this decision was taken just as a key vote was to be undertaken, innit? Why was the idea that the Tower Hamlets Labour Party BAME Forum was not abiding by the rules last night as opposed to Monday? Or even the day before?

Maybe the NEC never saw anything in the name of the Tower Hamlets Labour Party BAME Forum that gave any indication of its nature before yesterday evening?

Quite what the BAME forum have made of this can only be guessed at, fortunately for Biggs it’s not as if there was a huge voter base of residents who are of Black, Asian or Minority Ethnic origin who he has pis… oh. Right.

One member of the BAME forum was kind enough to give us his personal opinion of last night’s dissing of his group.

As ever in Tower Hamlets he will remain anonymous for his own good. It’s that sort of place.

“Biggs has made things difficult not only for minicab drivers (who in Tower Hamlets are predominately BAME) but in fact he’s f**ked all of us over and he’s only partially fulfilled his last manifesto.

If Biggs thinks he can secure cheap wins by reducing the number of branches voting he will be unprepared for the polls next year. Tower Hamlets Labour is finished if they don’t put up a candidate that can rival Lutfur.”

Ouch. Seems this is one Labour Party member who has not been swayed by the Mayor’s rivetting campaign material which will soon be the subject of a Netflix movie.

Momentum, but not that type.

Our Political Staff have been told that the timing of the Tower Hamlets Labour BAME forum being told that it literally does not count might just possibly be related to the general belief that had the BAME Forum voted against Mayor Biggs the momentum (the property of a moving body, not the Momentum group) of the ‘no more Biggs’ group would have been hard to stop.

The local Labour party is familiar with what happens when Amy Fode gets involved as was demonstrated only a few months back (Access denied: Mayor’s Men barred from Labour Party meeting in Islamophobia row).

And so it continues.