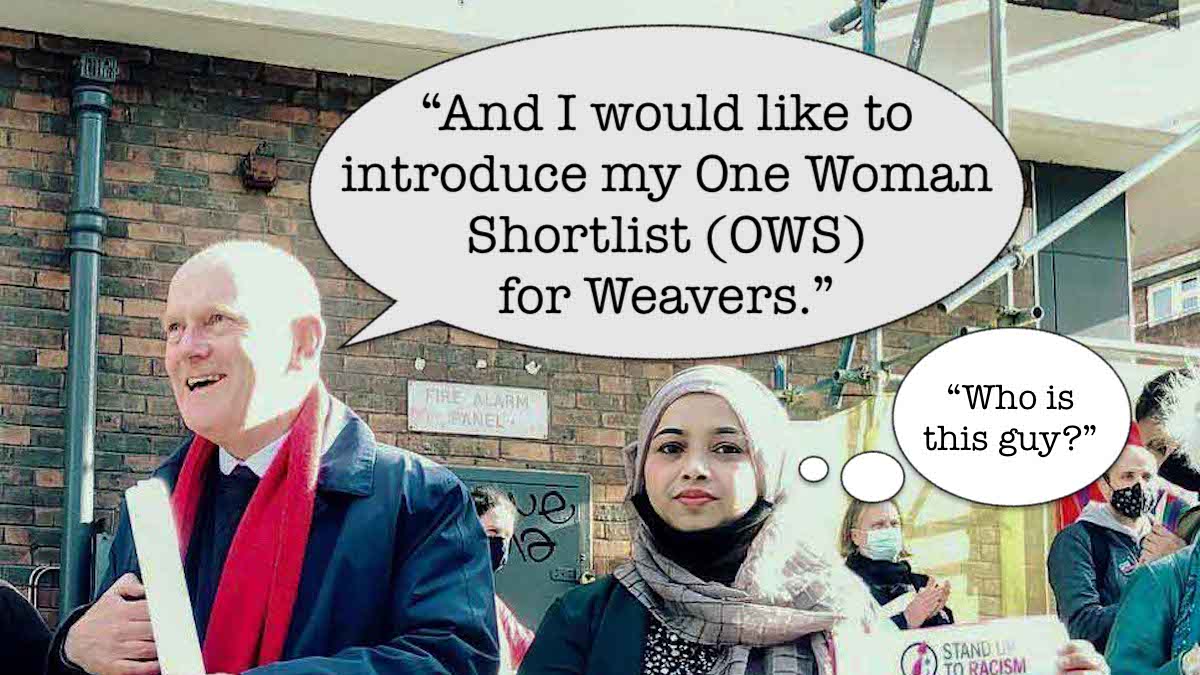 Well what a surprise! Seems that the car crash that was the selection of Apsana Begum as the Labour parliamentary candidate for Poplar & Limehouse is now standard procedure for Tower Hamlets Labour Party.

The Weavers AWS (All Women Shortlist) was as below.

Advice coordinator for AgeUK East London, parent governor at the local primary and Weavers resident for nine and a half years.

Active campaigner in the borough, led the campaign for worker’s rights during pandemic at Queen Mary University with GMB Union. Campaigns for Labour year round.

Seems to be very good selection of capable women from all different backgrounds for the Weavers Labour people to chose between, no?

Er, no. Cos the Weavers Labour people were sidelined.

And the winner is… huh?

Nasrin Khanam was selected and this might have been on the basis of her wonderful Zoom background of a banquet room with huge chandeliers. Lovely.

But it seems Ms. Khanam is not a Weavers person so will not get support from locals and her grasp of local issues could be stronger.

Dr Sonia Khan did not turn up (sensible woman!) while Afsana Lachaux and Heather Lafferty were regarded as good candidates but were passed over in favour of Ms. Khanam.

There were more than a few open mouths when the result was announced.

Well seems other people in a position of authority in Tower Hamlets Labour Party had decided in advance who was going to win and that was that.

Mayor Biggs loyal foot soldiers Cllr. Sabina Akthar (Stepney Green) who is Cabinet Member for Culture, Arts and Brexit and Cllr. Asma Begum (Bow West) Deputy Mayor and Cabinet Member for Children, Youth Services and Education were sent to take control of the selection process and that is exactly what seems to have happened.

Those present claim that not only did Cllr. Sabina Akthar and Cllr. Asma Begum take control of the meeting despite having no connection with Weavers but they then proceeded to promote Nasrin Khanam, the eventual winner, at every opportunity.

To further muddy the waters the Labour Party’s ‘Anonyvote’ system which is used for managing internal elections may not have been used to its full capacity.

We asked LBTH for a response and received this from Mayor Biggs. (Updated Friday 16 July 2021)

“Asma and Sabina were both there as representatives of the ‘Local Campaign Forum’ which is part of the local Labour Party and very specifically has a role in relation to the selection of local candidates and the scrutiny of our local government work. Most of its members are not Councillors.“

After every ballot Anonyvote automatically generates a PDF breakdown of the votes for the person running the ballot and an external observer for independent verification.

For some odd reason nobody has yet to see this report.

There again I have heard lots of bad things about Anonyvote recently so it is not surprising.

So it seems Mayor Biggs wanted Nasrin Khanam to win and win she did.

Much like various people wanted Apsana Begum to be selected as the Labour candidate to be our next MP in Poplar and Limehouse and so she is.

As is normal journalistic practise I emailed both Cllr. Sabina Akthar and Cllr. Asma Begum for their response to the allegations in the story and offer them right to reply.

For some reason Mayor Biggs does not think either of these councillors is grown up enough to reply so he did it for them. Here is what he said.

Oooh! Someone got out of the wrong side of bed this morning!

The first paragraph of his email can be dismissed as the usual BS that the Mayor spouts on a regular basis and thinks residents are daft enough to believe.

The second paragraph is much more interesting. Those who have had the dubious pleasure of observing Mayor Biggs over the last few years will know only too well that this sort of cheap snide comment is his trademark.

The full email exchange is so long (and entertaining) that we thought it deserves its own post so read all about it here, it’s a corker!