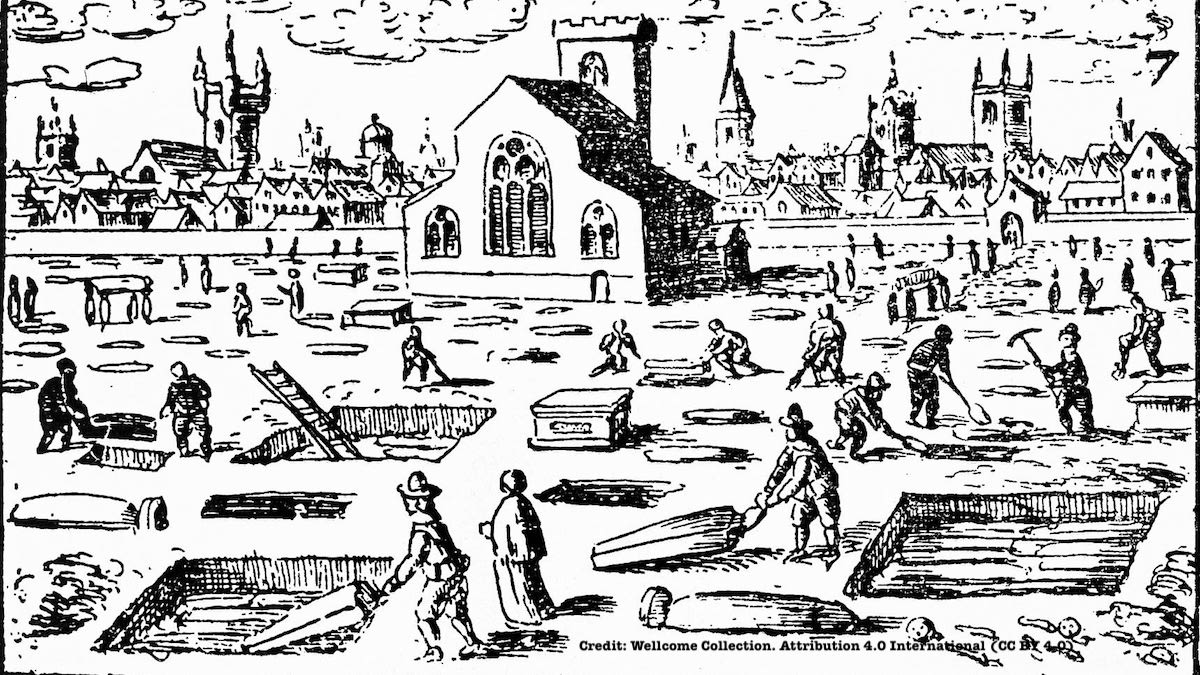 Bad as the current coronavirus pandemic is it pales into insignificance compared to the bubonic plague or Black Death pandemic of 1347-1351 that killed 100 million people, reducing the population of Europe from 475 million to 350–375 million.

Several centuries later the Black Death continues to cause problems.

Three plague pits are located under the former Royal Mint site at Tower Hill where the People’s Republic of China want to build its new UK embassy.

It is believed the bodies of several thousand people were tipped into the Royal Mint plague pits.

Many other plague pits are located in and around the bounds of 14th century London, essentially the area now known as the City of London.

Cllr. Peter Golds (Conservative, Canary Wharf) has written to Historic England, the public body responsible for the care and preservation of England’s heritage sites, asking them to ensure that a proper survey of the plague pits will be undertaken before any work on the Chinese Embassy can start (see full letter below).

It is not known how long this work might take.

Tower Hamlets residents and councillors have expressed their objection to the planned new embassy while the Chinese government continues to repress Uighur Muslims and pro-democracy activists in Hong Kong.

Planning authorities are required to take archaeology into consideration when determining planning applications and in cases such as the former Royal Mint site it would be normal for excavation and recording of archaeological evidence to be undertaken.

‘As you are aware, the government of the People’s Republic of China are seeking consent to convert the former Royal Mint at Tower Hill into a new embassy. I am writing to bring to your attention my serious concerns as to the effect of this work may have on a site of major and significant historical importance.

The Royal Mint, known as the Johnson Smirk building, was erected in 1809. It stands on the site of the former Cistercian Abbey, St Mary Graces, which was founded and endowed by King Edward III in 1350. It was dedicated to the Virgin to whom the King attributed his escape from peril on “land and sea.” It was both the last English Cistercian House to be established in England and the only House of the order to be in an urban area. It became known as Eastminster in contrast to Westminster.

Prior to the establishment of the monastery, during the Black Death of 1348-49, the site became a plague pit or cemetery and it is known that this included three mass burial trenches as well as a number of grave rows. Between 1986-88 there was excavation of the site and some 762 bodies were recovered.

From research at the City of London, I understand that the foundations of the Abbey are well preserved and some are visible in the basement of the site.

After the dissolution, the monastery buildings were progressively demolished until the erection of the Johnson Smirk building in 1809.

My concern is that across this site will be foundations and potentially artefacts of the last Cistercian Monastery to have been established in England. Furthermore there will be the undisturbed burial sites of victims of the Black Death. It is possible that the Abbey Church itself would have been erected across burial sites.

The Embassy itself will require extensive building. It will, as do all embassies, have deep and secure cellars.

Only part of the site has been excavated and I am therefore asking that Historic England undertakes a full and proper survey of the site to ensure that the former Abbey foundations are protected for future generations. Furthermore, I hope that a survey and investigation is undertaken to see if any of the proposed developments impede on the unexcavated burial sites. If so, steps should be taken to remove remains with care and dignity.

This is a site of major historical importance as well as the last resting place of hundreds if not thousands of Londoners whose lives were lost in a great pandemic.

I look forward to your response and to your support in ensuring that this valuable heritage site is retained for future generations.

60,000 bodies were moved and reinterred from plague pits near Euston Station that were uncovered during excavation work for the HS2 railway in 2017 and in 2015 4,000 plague victims were discovered at the site of the new Crossrail station at Liverpool Street.