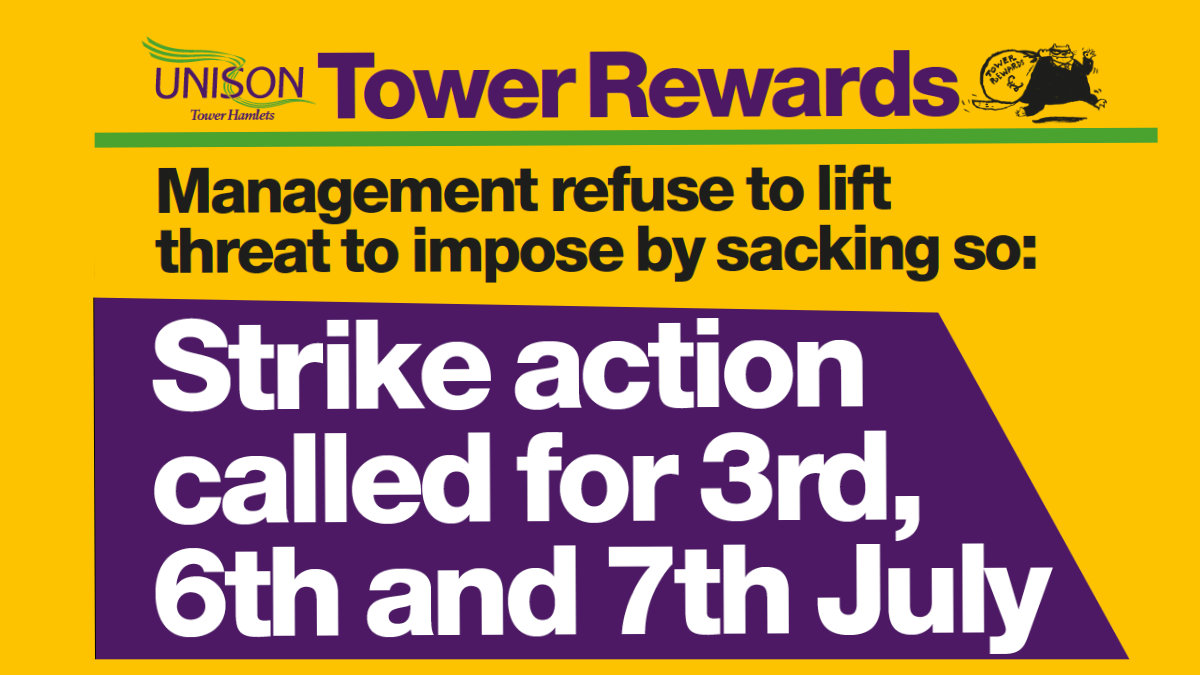 Seems London Borough of Tower Hamlets (LBTH) is determined to end the Covid-19 pandemic as it began with overflowing rubbish bins on our streets increasing the risk to public health once more.

Tower Hamlets UNISON has announced strike dates of Friday 3rd, Monday 6th and Tuesday 7th of July in response to the LBTH threat to sack 4,000 council workers if they do not agree to the new ‘Tower Rewards’ conditions being imposed on them.

LBTH claim that ‘Tower Rewards’ is an essential move to make the council more efficient.

According to UNISON ‘Tower Rewards’ cuts a range of staff allowances, payments and conditions and LBTH has refused to consult with staff in community schools.

Town Hall staff have previously been issued with 12 weeks’ notice of dismissal but a truce was called because of the pandemic.

Recent talks between the two sides brokered by the Advisory, Conciliation and Arbitration Service (ACAS) have broken down and now a strike looks inevitable.

Note: The former Veolia workers have recently transferred in on a different contract arrangement so are not part of the dispute.

In a prepared media statement a Tower Hamlets Council spokesperson said: “We have been consulting with our staff and trade unions about changes to terms and conditions [Tower Rewards] since January 2019.

Our aim has always been to reach a collective agreement. This had not been possible in our meetings with both local and regional officials, so we asked ACAS to work with all parties to support conciliation. We continue to urge the trade unions to come back to us so we can swiftly find a solution.”

Irrespective of the details of this dispute it is irresponsible for LBTH to threaten to sack 4,000 members of its workforce while the Covid-19 pandemic still remains a very real threat to the health of every resident of the East End.

The ‘Tower Rewards’ proposal and dispute is not new, it was first proposed back in January 2019.

We are all living in exceptional times and it is essential that all LBTH workers are out doing their jobs – many of which none of us want to do – because without them the borough will get a lot worse and pretty quickly.

They are essential workers. The borough ceases to function without them.

Quite how Mayor John Biggs and CEO Will Tuckley think it is now sensible to continue with their campaign to impose ‘Tower Rewards’ on an unwilling workforce during a health pandemic is baffling.

A delay until the pandemic is well in the past is the only sensible option. Then the arguments can continue with less risk to public health.

But then this is Tower Hamlets.