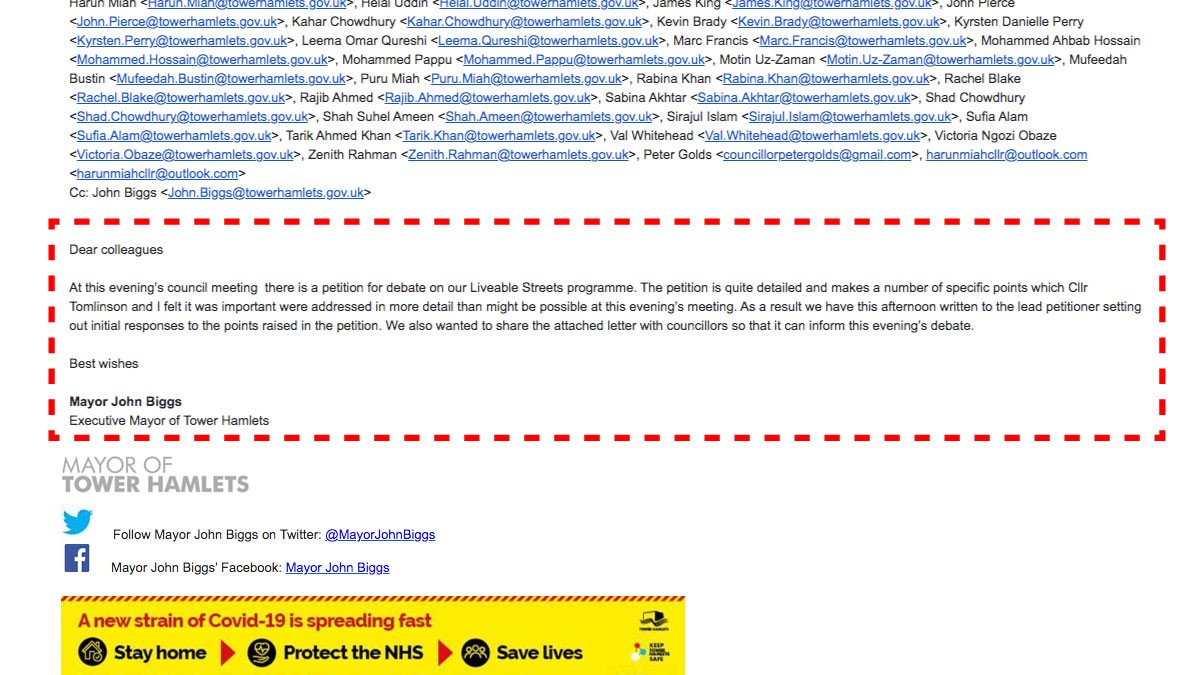 This is a photo of a boy doing some whitewashing. The image at the top of the page is a screen grab of the header of the covering email of another whitewash job by Mayor John Biggs.

Around 16.00 today Wednesday 20th January Mole obtained the document below sent by Mayor John Biggs to all councillors ahead of tonight’s cabinet meeting at which Liveable Streets will be discussed once again.

The PDF document information shows that this was only created at 14.33 today.

It is addressed to Tonu Miah who is presenting the Liveable Streets petition at cabinet tonight. (7pm in case you have forgotten).

Here’s what Mayor Biggs says in the covering email.

“Dear colleagues, At this evening’s council meeting  there is a petition for debate on our Liveable Streets programme. The petition is quite detailed and makes a number of specific points which Cllr Tomlinson and I felt it was important were addressed in more detail than might be possible at this evening’s meeting. As a result we have this afternoon written to the lead petitioner setting out initial responses to the points raised in the petition. We also wanted to share the attached letter with councillors so that it can inform this evening’s debate.”

Has anyone ever read more disingenuous shite than this?

Before you read on you may wish to take advantage of Moley’s sick bucket. This is provided free of charge as a service to our readers.

The sick bucket is only deployed in the most serious situations as when someone is going wee wee on your foot and telling you it is raining. Like now.

‘Addressing points which … I felt it was important were addressed in more detail than might be possible at this evening’s meeting…’ Really? Seriously?

Reality is that Mayor Biggs is wetting himself that he has lost the Liveable Streets argument and he is trying to pull a fast one by sending this out to councillors before tonight’s cabinet meeting.

Because he didn’t send you a copy, did he? But then you are only a resident so what has this to do with you? You only matter when your vote is up for grabs and then you can sod off.

So unsuspecting residents who have no knowledge of this document virtually attend the meeting and find that they are way behind the pace.

The second paragraph of the document below is more hypocrisy.

“While we will of course respond to the petition at the meeting our procedure rules mean that time for a detailed response to each of your points will be limited. On that basis, and given the substantial public interest in this matter, I wanted to write to you in advance to respond to each of the points raised in your petition.”

Substantial public interest? As in the lies of people like Cllr. Kevin Brady trotted out having been well and truly exposed and Liveable Streets is falling to pieces?

The sooner this borough votes out the likes of Biggs, Brady, Pierce, Ullah, and their assorted rabble the better.

In the meantime please read the PDF below, there are four pages in total.

Put your gas masks on please

Moley hopes you have enjoyed this brief insight into the sewer that is Tower Hamlets Labour Party.

He has a funny feeling there are going to be a lot more insights real soon now, so make sure you get a proper gas mask to stop the smell.

Cancer sufferer forced to delay chemotherapy due to council intransigence