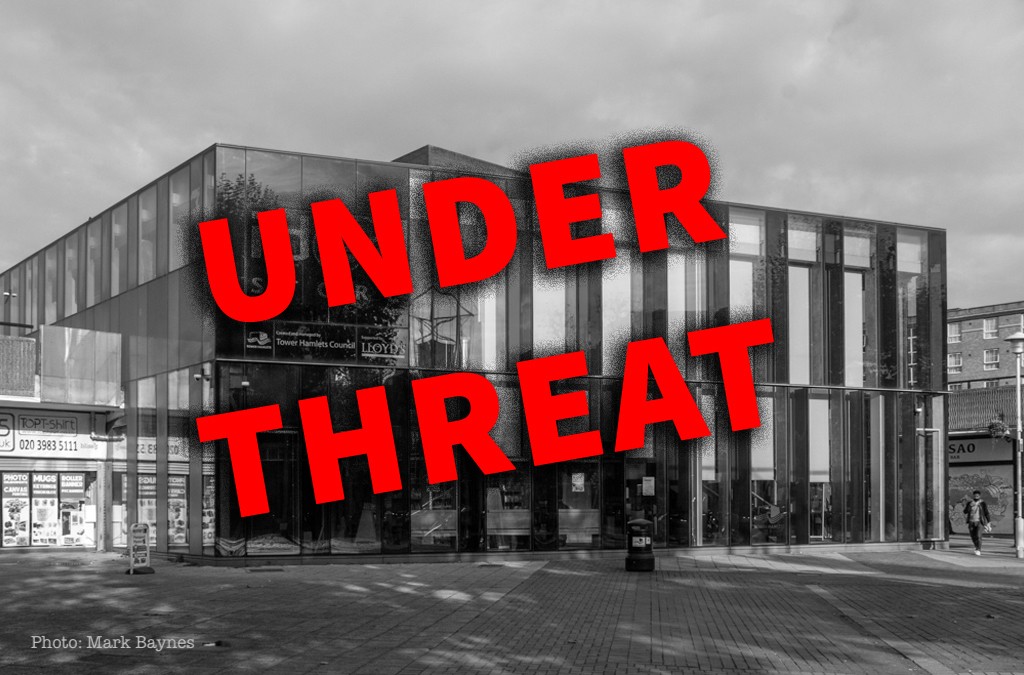 Several independent sources have confirmed to the Enquirer that Tower Hamlets council plans to close all Idea Stores and libraries in the borough.

Savings of up to £40 million could be achieved which would prop the council up financially for a while longer.

A report presented to LBTH council on 28 October 2020,‘Revised approach to Ideas Stores & Library Service’, uses the Covid-19 pandemic as one reason to close the libraries, citing ‘the increased financial challenge the council is facing’ and that ‘Covid-19 will continue to prevent a return to normal [Idea Store] service for an extended period to come’.

A consultation will take place starting in Late November 2020 and a report with more concrete proposals will be presented to Cabinet in the first quarter of 2021.

“In the last couple of years, we have seen a shift in how our residents engage with our Idea Stores, with many people now opting for our self-service online options.

“In light of this and the increasing financial challenge the council faces after the cost of dealing with Covid-19, we will be holding a public consultation at the end of November to ask residents their views on how to shape the future of the service.

“No decision has yet been made and the same level of service is currently on offer, with Covid-19 restrictions in place.”

A spokesperson from Tower Hamlets Council has just provided us with another response on this story flatly denying that LBTH is looking to close Idea Stores.

“We are absolutely not looking to close all of our Idea Stores. Our proposals are clearly outlined in the report that went to Cabinet at the end of October, which recommends consulting with residents on changes to how the service is offered.

“The biggest impact this could have is the potential closure of Cubitt Town Library, which is our least used library in the borough and residents on the Isle of Dogs can access Idea Store Canary Wharf. The report also proposes potentially changing opening hours at other sites.

“The needs of our residents remain our top priority and we are committed to providing an excellent library offer. Despite almost 800 libraries closing nationally since 2010 we have worked hard to protect our services locally, but we are now also faced with unprecedented financial challenge due to the pandemic. We will begin consulting on our proposals within the next few weeks.”

The main consultation proposals are:

However under Alternative Options the closure of the Idea Stores is clearly proposed as an option.

‘2.2 Deliver a similar level of saving by permanently ceasing Idea Store services at Cubitt Town Library, Bethnal Green Library and IS Watney Market. This option is not recommended as we believe the impact on service users and local communities would be unacceptable.’

Commenting on the reported closure plans Cllr. Peter Golds (Conservative, Island Gardens) referred the Enquirer to the report by Danny Kruger MP “Levelling up our communities.” published in September.

‘The section on libraries is relevant to the Tower Hamlets situation. The appointment of a Libraries Commissioner is controversial, but he [Kruger] reiterates the responsibility of government in the provision of libraries. The council must, be held to task on their statutory responsibilities regarding library services.’

Section 7 of the Public Libraries and Museums Act 1964 requires local authorities to provide a ‘comprehensive and efficient library service.’

This from page 42 of the Levelling up our communities report.’The local Library is or should be a crucial element of the social model we need to create, or re-create. Libraries are no longer dusty book depositories. Increasingly they serve as digital hubs and information centres for communities, and places for classes and sessions of all kinds.’

The Local Government Association, in responding to the Kruger report said that “We welcome the value the report places on libraries. Community-led libraries are not a replacement for a statutory library service.”

Cuts are precursor to eventual closure of libraries

The Enquirer asked Tower Hamlets Unison for their view and we were provided with this media statement from a Unison spokesperson.

‘The proposed closure of Cubitt Town will leave a huge swathe of the borough, everything south of the South Dock, without a library. The library is a much loved community asset whose future is now in doubt. As the paper itself concedes, older people, people with disabilities and children will be adversely affected as the nearest Idea Store is at Canary Wharf and “Children would be less likely to travel further unsupervised” and people with disabilities “would need to travel further and may not have the support needed to do so”

‘The reduced hours at Bethnal Green library and Watney Market Idea Store we fear will be the precursor to their eventual closure. The reduced hours will make it less convenient for some residents and consequently there is likely to be a reduction in the number of users. A drop in numbers may be used as the justification for their closure. This building is central to a huge chuck of the overcrowded north west of the borough. Watney Market Idea Store services an even bigger area. If it did close, the nearest Idea Store would be the one at Whitechapel. This would mean a trip on the Overground or a long walk for residents in Wapping.’

Obviously, for a trade union the floated cut of 20 jobs is a concern. Given that a number of staff work flexibly the number of staff being made redundant is likely to be more than 20. We would urge you to support our campaign to oppose this proposal.’

Many thanks to Unison for this.

What new evil is this? Closing libraries? There is no genuine reason to even consider such a barbaric act although Covid-19 seems to be the excuse as it seems to be for most things in 2020.

The reason Tower Hamlets Labour administration is considering closing the libraries and Idea Stores is because the council has mucked up its finances big time. This is a very complex issue which we will return to, safe to say that repeated failures to follow the most basic principles of local authority financial management are the real reason for the continuing series of cuts to essential services in the borough such as the Day Centres.

The excuse is Covid-19, the  reason is incompetence.

Every day there is another report of the damage to children’s learning and literacy that the pandemic has caused. Many of these children have nowhere else to go to sit and read than the library.

Libraries are havens, not just buildings.

Another issue is that when cuts have previously been made the standard bone thrown to residents is that bits of the cut service will be available in Idea Stores.

So if the Idea Stores close what other services go with them?

The Enquirer has never really understood why the council makes such a big deal of the Idea Stores. At best they are adequate (although the staff are great). And we love libraries. They are the best.

Over the water Southwark boasts no less than eleven libraries. The Canada Water library is sublime, both inside and out. If you have not visited go and have a look (from the outside only at the moment) and you will see what we mean.

The ‘Revised approach to Ideas Stores & Library Service’, report which heralds the start of the cultural vandalism being proposed has this on the first page.

Outcome 9 – People say we are open and transparent putting residents at the heart of everything we do.

Seriously? Who writes this junk? And how much do they get to paid to do so?

That Tower Hamlets council thinks that anyone takes corporate nonsense like this seriously perfectly illustrates the problems our borough faces.