No, we have not lifted that headline from a story about Mayor Lutfur Rahman and his dodgy corrupt grant allocations in 2014 – this story is about the current Mayor of Tower Hamlets John Biggs in 2020.

Grants? Tower Hamlets? Seriously? We haven’t even finished the Poplar Papers yet!

The group is represented by Hodge Jones & Allen Solicitors.

Save Our Communities and Save Our Services

Call us picky but this group does not seem to be very diverse. In fact it seems to be overwhelmingly Bangladeshi. The group would be well advised to reach out to the many other groups from other ethnic backgrounds. These groups could contact Hodge Jones & Allen Solicitors directly if they have similar grievances, at the moment we do not have a contact email for Save Our Communities and Save Our Services (please get in touch!) but we have approached Jones & Allen Solicitors for comment.

A Judicial Review (JR) is “a challenge to the way in which a decision has been made, rather than the rights and wrongs of the conclusion reached” and is a key step towards further legal action. No JR then nothing happens.


The fact that Save Our Communities and Save Our Services have been granted a JR is very significant by itself. Even more significant is that Moley has been reliably informed that LBTH has hired a very expensive QC to fight its case.

LBTH must be worried.

Here is our understanding of what has been going on. Allegedly.

A little bit of recent history

Far, far away and long, long ago the previous directly-elected Mayor of Tower Hamlets, was caught out doling out grants to his mates in specific borough wards as opposed to those who needed the grants. And the electoral petition followed showed that he did this to influence elections in the borough. This was no slight difference as the Wapping Mole revealed in October 2014 when he was on the staff of Love Wapping.

Simple Mole arithmetic showed that while every residents in Lutfur’s heartland of Spitalfields and Banglatown benefitted from £107 of grants from Tower Hamlets Council each resident of Millwall, absolutely not a Lutfur heartland, only got £2.30 in grants. 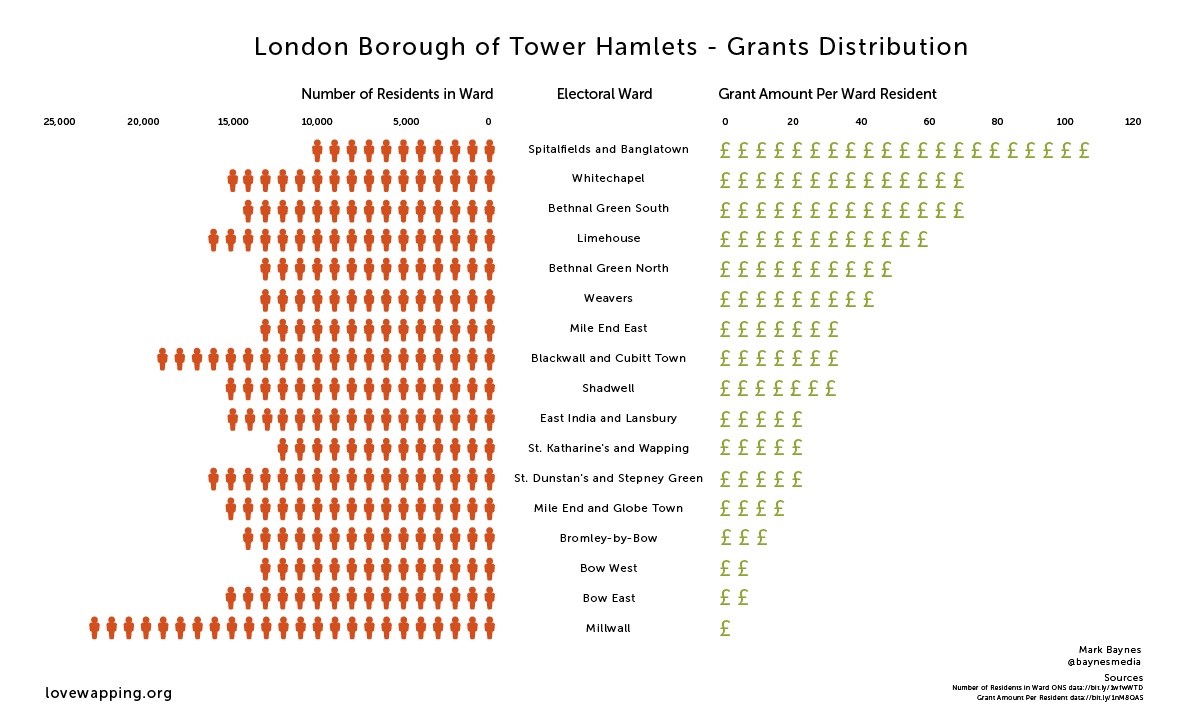 But that was then. This is now. We think.

As a result of the electoral petition and Rahman being kicked out of office the Department for Housing, Communities and Local Democracy (DHCLG) Commissioners who were running Tower Hamlets council at the time radically overhauled the whole grants system with the aim of stopping this sort of corruption in future.

To be honest the Commissioners may have gone a little too far with the result that the smaller community groups found the new grant application system so onerous that they often did not bother applying.

EEE has been told this by numerous organisations in the borough. There is also a widely held belief that organisations who do not support Tower Hamlets Labour Party also do not get a look in when grants are available. The Commissioners failed to create a grants system that prevent pure spite being a factor in decisions.

You can pop over to the LBTH Community grant information page to find out more of how council grants are administered.

Just writing the words ‘Local Community Fund (LCF)’ reminds Moley of the months searching and analysing council grants records. Moley even had a proper burrow then!

The challenge to Mayor Biggs’ decision is partly as a result of the Call-In Meeting by the Overview & Scrutiny Committee of 14th August, 2019 which in turn was the result of no less than five Labour councillors – Puru Miah, Gabriela Salva-Macallan, Ehtasham Haque, Shad Chowdury and Shah Ameen – creating a ‘Call In’ on Wednesday 31st July 2019 at a Cabinet Meeting.

The Call In document states the councillors belief that:

Save Our Communities and Save Our Services claim that Mayor Biggs has treated them with “absolute contempt” and that he has cut their funding lifelines which will force many of them to close.

In return the 33-page LBTH JR document argues that the case ‘has no substantive merit’ and that “the claim invites the court to overturn a decision of the democratically elected council regarding the distribution of public money. The central difficulty with that claim is that Parliament has determined that it is for local authorities to make decisions on the competing demands on their finances and how to distribute scare resources.”

Uh huh. There is a lot more of that stuff in the JR document we currently have, please read it for yourself.

That is all we know for the moment. Moley has a nasty feeling that this story will run and run.

Whatever the facts of the case and the final outcome it is nothing short of disastrous for the grant funding judgements of Mayor Biggs to be challenged in court.

*A note on Wapping Bangladeshi Association

Odd to see Wapping Bangladeshi Association (WBA) in this group. The WBA has been under the control of Cllr. Abdal Ullah (Labour, St Katharine’s & Wapping) for years. Cllr. Ullah is one of Mayor John Biggs closest allies and frequently acts as his chauffeur and bag carrier.

Saying something to Cllr. Ullah is the same as saying it to Mayor Biggs, so it is strange to see WBA complaining it has been excluded from some grants and so bringing him in direct conflict with his bestest buddy the Mayor.

It’s more than strange. It is super weird.

An examination of the total amount of grant money (£222,359.82 since 2012, 57% of all the third-sector grant funding in Wapping (£386,810.71) according to the LBTH site) and other council payments made to WBA for services over the last few years will show a not inconsiderable sum. EEE may return to this subject.

If you found this story useful please consider helping the Wapping Mole and the East End Enquirer continue to cover issues like this by clicking the PayPal donate button below.(You can also pay by debit cards using this link).
Tower HamletsCouncil grants