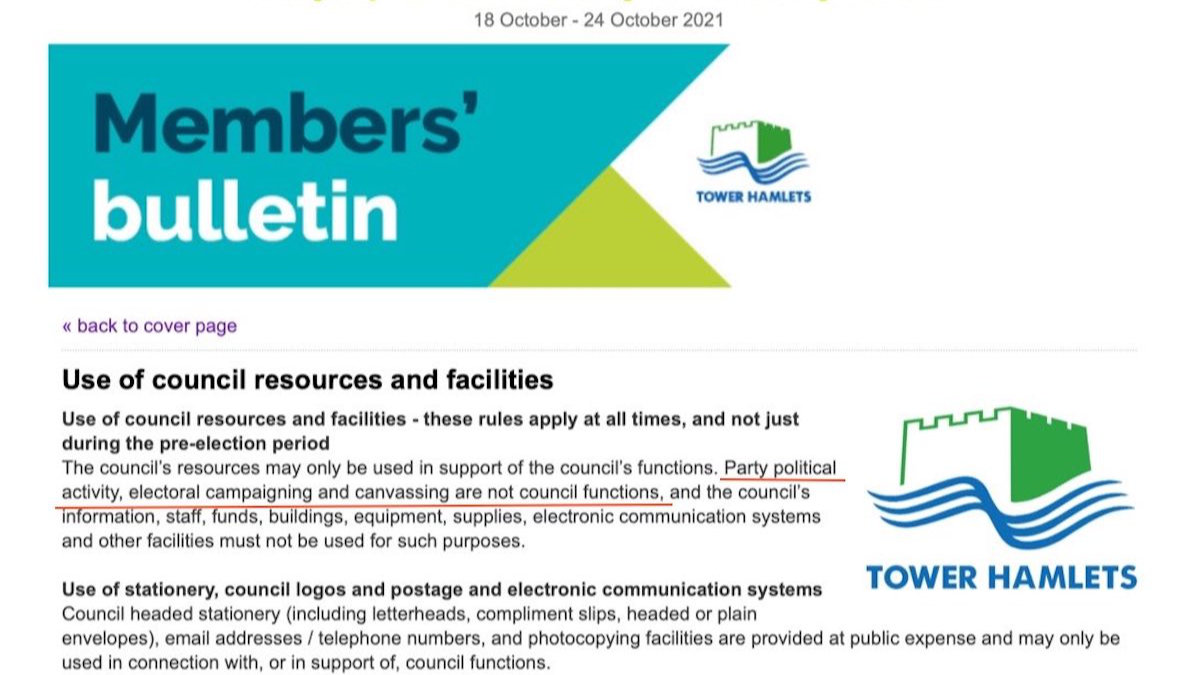 One of the subjects of tonight Tower Hamlets Council cabinet meeting is the adherence to the Seven Principles of Public Life, commonly known as the Nolan principles.

We mention this as Tower Hamlets Labour Party is completely ignoring the rules that forbid council functions being used for ‘Party political activity, electoral campaigning and canvassing’ because these are party political functions. You can see the current Members’s bulletin with a reminder about this from the Monitoring Officer below.

The reason this is an issue is because of the leaflets being distributed by Tower Hamlets Labour Party such as this.

Tower Hamlets Labour Party has been told by the Monitoring Officer that it is not allowed to use Council email addresses & phone numbers in this way.

She is being ignored it would seem.

The question residents have to ask themselves is “If these people are ignoring this rule what other rules are they ignoring that we just don’t know about?”

The Seven Principles of Public Life

Holders of public office should act solely in terms of the public interest.

Holders of public office must avoid placing themselves under any obligation to people or organisations that might try inappropriately to influence them in their work. They should not act or take decisions in order to gain financial or other material benefits for themselves, their family, or their friends. They must declare and resolve any interests and relationships.

Holders of public office must act and take decisions impartially, fairly and on merit, using the best evidence and without discrimination or bias.

Holders of public office are accountable to the public for their decisions and actions and must submit themselves to the scrutiny necessary to ensure this.

Holders of public office should act and take decisions in an open and transparent manner. Information should not be withheld from the public unless there are clear and lawful reasons for so doing.

Holders of public office should be truthful.

Holders of public office should exhibit these principles in their own behaviour and treat others with respect. They should actively promote and robustly support the principles and challenge poor behaviour wherever it occurs.

A Message from Mr Lutfur Rahman