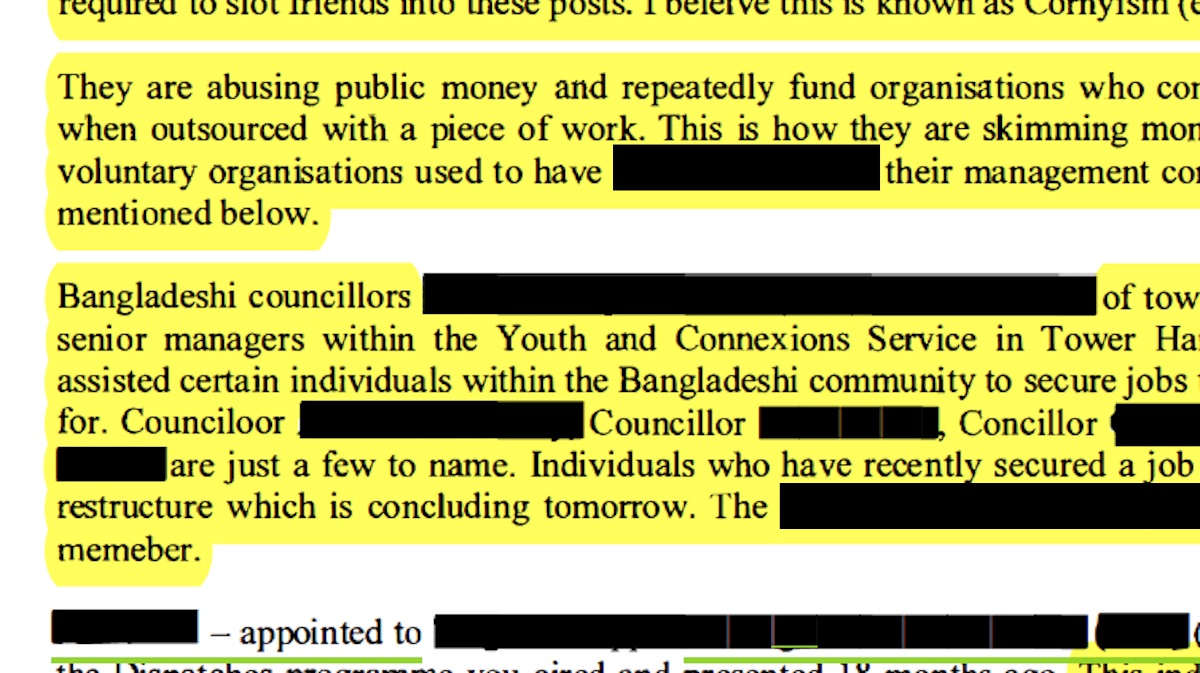 Can you remember what you were doing in May 2011? Nope, neither can we. Mole is pretty sure he was much better off as he had yet to collide head on with the corruption endemic in Tower Hamlets politics.

Mole is hoping that some borough residents who read this can remember that in May 2011 they had just sent the below email to Mr Harrison, then waited for a response.

A response that never came.

It was only several years later that it was discovered that this email even existed.

And as far as we are aware nothing has been done about it. Until now.

Keep this this super confidential, just between you and the Furry Blind One, but Moley has been working on a historical review of every report of corruption in Tower Hamlets Council for some months now. Which is why he has not been publishing as many stories as usual.

Which is how the email turned up. OK, we have known about it for ages and have made an appeal before but we thought it was worth another go. Once you have read it you can see why. Sure lots of the key bits have been redacted but if they weren’t we wouldn’t have to ask for help, would we?

The names we want, really, really want, are those of the four Labour councillors referenced. Who knows, they might still be in the current administration.

That would be fun, wouldn’t it?

From: [REDACTED]
Sent: 25 May 2011 07:45
Mr Harrison
Please see email below – which we have sent to other places who have suggested to make your organisaion aware.

We have information to how Labour elected councillors are supporting local council officers creating unnecessary jobs/posts to slot friends and family in to jobs in the Youth & Connexions Service in Tower Hamlets.

These people are of the same ethnic group – Bangladeshi and IFE (Islamic Forum Europe) members. We have taken our concerns to LBTH whistleblower line (not helpful), the National Audit Office, who said it is not in their remit, local audit office, Tax Payers Alliance, local conservative councillors ( you know him – councillor Golds – who are powerless to act).

Under the current government comprehensive spending review the restructure of the youth and connexions service is not achieving value for money. They are using Early Intervention Grant (EIG) which is central government funding to create managerial jobs that are not required to slot friends into these posts. I believe this is known as Cronyism (excuse my spelling)

They are abusing public money and repeatedly fund organisations who continue to fail in their delivery when outsourced with a piece of work. This is how they are skimming money from the service. As these voluntary organisations used to have [REDACTED] on their management committee board and councillors mentioned below.

This individual has jumped from PO 1 Grading to P06 grading job and is not even degree level qualified. He was also given an advantage as he had been doing an interim post for the past two years so no one else could apply.

[REDACTED] has no formal qualifications and can barely string an English sentence together. He was an activist for the Respect party and now an activist for Labour party. This person has also been reprimanded for sexual harassment and is allowed to work with young people.

[REDACTED] came into the service 6 years ago as a volunteer and part time youth worker and now has a strategic job. Appointed to [REDACTED] no formal qualification and has superseded his managers. This individual went round with the mayor during the consultation period in his support. Was filmed by Unison at a meeting speaking in favour of the cuts he has announced.

Furthermore for none of these management posts had any forms of tests to assess their suitability. When front line staff who had to go through the process required to have a case study tests. IFE member.

All of the managers appointed in the current YCS restructure are all Bangladeshi ( and some we believe are IFE members), other non Bangladeshi staff are being pushed out. These appointed managers are less qualified than the front line staffs that are required to have a degree level qualification. These managers posts JD stipulated “good general education” and that’s how they have been slotted in. We have attached the JD for your reference. I have also attached JD for a front line staff LBTH personal Adviser. See the comparison your self. All of the interviews conducted did not have an independent panel member. They had a admin person who has recently and strangely been given strategic role (and uplifted REDACTED) on the panel. [REDACTED] is not in a position to interview and know the roles and responsibilities of these posts under competitive and potential assimilation.

This whole things a joke and they are making a mockery of the current government spending review agenda only to create unnecessary post to slot their friends into.

This needs to be investigated NOW. Or Tell us where we can take this to.

Was this you? If so please do get in touch either via email hello@eastendenquirer.org. Direct Messages on @EastEndEnquirer are also open.

Just for your reading pleasure (and only you, right?) here is a list of the past high-level corruption investigations (stop sniggering!) that we know of. There are almost certainly more, probably going back to the last century.

Note that the various flirtations with undertaking an investigation into criminality in Tower Hamlets by the Metropolitan Police are not listed as the Met seems to have immense difficulty doing the whole finding evidence thing.

Which is kinda odd ‘cos some days we are just tripping over evidence of criminality and corruption. Odd huh? Guess we just get lucky.

Investigation journalism takes a huge amount of time and resources and we are totally reliant on the community to help us with donations. OK, we don’t do cup cake recipes but we like to think our work is more useful. Not that we have anything against cup cakes. So if you could find your way to donating to help the East End Enquirer to keep exposing what really goes on in Tower Hamlets that would be very good indeed!