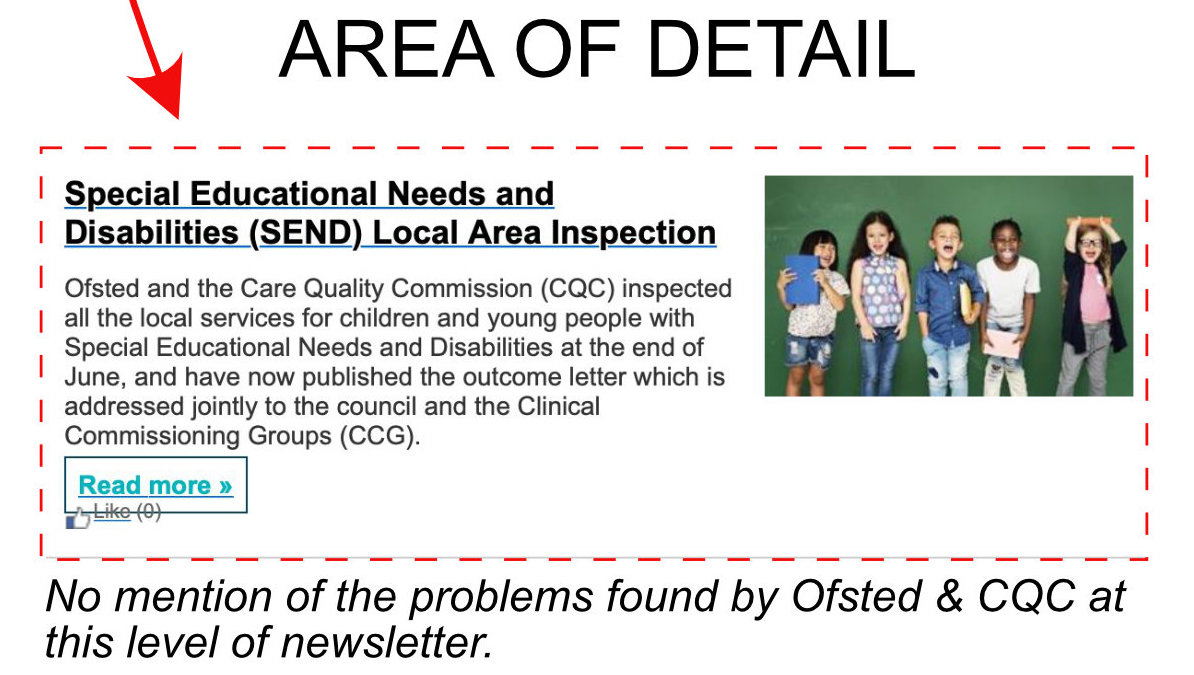 Earlier this week a keen-eyed resident told the Enquirer that once again the Tower Hamlets Labour administration was attempting to hide bad news, this time about Special Educational Needs & Delivery (SEND) services.

Before Mole gets into more detail on this, a message from Mayor Biggs.

Cllr. Wood has raised these issues with the Council.

Today is a good day to fail to bury bad news

This is as clear an attempt to bury politically bad news as any.

And the Mayor’s failed attempt to hide the identity of the new tenant in Sutton Street Depot.

The question now is what else is being hidden by Mayor Biggs?

The other question is who was involved in the latest example of the corruption of normal local government process?

Obviously the Mayor was involved, and questions need to be asked of Cllr Rachel Blake () who is the Cabinet member for health.

Presumably other Labour councillors were in on this cover up as well as others. Who are they?

Additionally LBTH CEO Will Tuckley also needs to be questioned as it was his officers who aided and abetted the coverup.

Who are these officers?

Council officers do not work for the Labour Party

The involvement of council officers highlights another fundamental problem, that some of them are no longer politically neutral but think they are being paid by the Labour Party.

Council officers should treat all elected representatives in the same way.

In Tower Hamlets this seems to not be the case.

Time and again Opposition councillors only become aware of Council events in their own wards by chance if at all. If these are Labour Party events then no problem.

But they are not.

The result is that a resident attending the event might well notice why the Ward councillor was absent and understandably consider that their councillor did not give a damn about the event and might not vote for them again.

Handy huh? Well, it is if you are a Labour councillor.

Other forms of discrimination against Opposition councillors are a lack of support services and delays responding to their Member Enquiries (MEs) which are essential for their work.

Both Mayors consider the Council administration as their own political toy and some council officers go along with their political wishes.

Their trade union representatives might want to warn them that there are personal consequences to their actions.

That Mayor Biggs considered the issue of the treatment of some of the most vulnerable in our community, those with Special Educational Needs and their parents and carers, to be covered up to suit his own purposes is despicable.

And of no surprise to anyone with a basic knowledge of Tower Hamlets politics.

Servants of the people

If you know about dodgy dealings in Tower Hamlets Council then let us know by emailing hello@eastendenquirer.org or clicking the ‘Got a story?’ link in the main menu at the top of the page.

On which note many thanks to the increasing number of residents who have done so already. You are the real servants of the people. Keep ’em coming!

With the amount of dodgy dealings stories that are being generated in the borough at the moment Moley needs a new pencil! But he is a poor little Mole so if you could find your way to donating some Mole pencil cash to him that would be very good indeed!