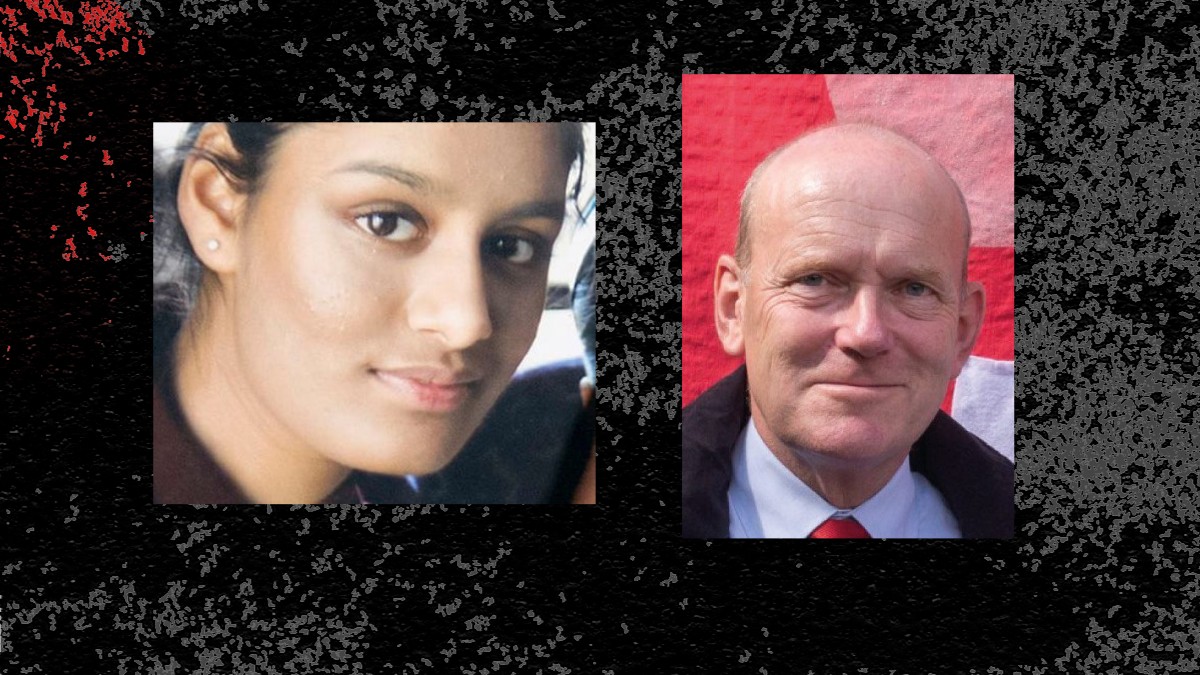 Funny old world innit? Mayor Biggs campaigns on the promise of ‘the highest standards of probity, honesty and transparency in everything the council does’, then when elected dedicates immense amounts of time, effort and money to ensure no information ever escapes from Tower Hamlets town hall.

You can read the Labour manifesto he was elected on here, the quote above is from page 40.

One of the subjects that Mayor Biggs is keenest to keep absolutely 100% secret is the reason why there have never been any Serious Case Reviews into the Bethnal Green Academy girls who were radicalised while living in Tower Hamlets and fled to Syria.

“Worst case of child radicalisation in the western hemisphere”

Amira and Kadiza were killed, Shamima survived and is now in a refugee camp in Syria. She has been stripped of her UK citizenship but the legal battle to reverse this decision continues.

Shamima’s lawyer Tasnime Akunjee has described this as “arguably the worst case of child radicalisation in the western hemisphere”.

If you are a borough parent you probably want to know that when you send your kids to school that they are not being radicalised by some thugs who use a medieval interpretation of one of the world’s great faiths to attract children to join their organisation.

Mayor Biggs and senior council officers in his administration don’t seem too fussed though.

In fact they do not seem fussed at all. Which is kinda odd don’t you think?

The girls were radicalised, either online or in person, at the very end of the Rahman administration in the months leading up to February 2015 when they left the UK.

In April 2015 Rahman was kicked out of office for corruption and John Biggs became Mayor in June promising to clean up the borough.

Which makes it even stranger that he never triggered a Serious Case Review (SCR).

Here’s another snippet from the 2018 Tower Hamlets Labour Party manifesto (page 14). “…we will review the operation, successes and failures of Prevent with local partners and community representatives, with the aim of developing a more effective radicalisation and counter extremism strategy that better commands the confidence of our community.”

Sounds great. If this review ever happens can we ask that a SCR into the three Bethnal Green Academy girls be included? Thanks!

One last quote expressing the intentions of Mayor Biggs is on page 40.

“Finally, whether it is fear of radicalisation or of sexual grooming, violence or exploitation, vulnerable people in our community need to be safeguarded. Our respect for each other needs to be underpinned by a respect for a diversity of views and perspectives but also an understanding of the need to look after the vulnerable and those at risk of exploitation in
whatever way.

Vulnerable people in our community need to be safeguarded? Apart from 15-year-old Bangladeshi school girls it would seem.

Seems safe to work on the basis that, for whatever reason, Mayor Biggs would be more than happy if a SCR was never carried out into how the Bethnal Green girls were radicalised.

Residents take a different view. Since 2015 some have been quietly working away, in conjunction with some councillors and other concerned individuals, to find out why the SCR never happened.

One of these residents submitted a Freedom of Information request to Tower Hamlets, the text of which you can read below and a PDF is here.

Freedom of Information request 27548267 to LBTH

How many ‘Notifiable Incidents’ were reported to OFSTED regarding the children that were groomed and fled to Syria ( Shamima Begum, Amira Abase & Kadiza Sultana)?

Dates those ‘Notifiable Incidents’ were reported to OFSTED

When were these ‘Notifiable Incidents’ reported to the LSCB (Local Safeguarding Children’s Board)?

Dates of Tower Hamlet’s meetings with LSCB regarding these ‘Notifiable Incidents’?

Dates of any interaction with ‘National Panel of independent experts on Serious Case Reviews’ regarding discussions of whether to complete a Serious Case Review for the above children.
For context ‘Notifiable Incidents’ are related to in the Government guidance ‘Working Together with Children 2015’ – Pages 74-80 Chapter 4: Learning and Improvement framework.

The response from Tower Hamlets council is below.

Five variations on not being able to either confirm or deny whether the information is held. That ain’t much use.

‘Neither confirm or deny’ is helpful though, in Mole’s experience this phrase is always trotted out when the issue relates in any way to the security services.

In reality this doublespeak means ‘We most certainly do have it but we ain’t showing you!’.

The citizen investigators working with Moley on this and other investigations are a determined bunch and they know their subject area better than most professionals, and how the Freedom of Information system works as Ms. Amy West will now demonstrate. Take it away Amy!

Dear Tower Hamlets Borough Council,
Please pass this on to the person who conducts Freedom of Information reviews.

I am writing to request an internal review of Tower Hamlets Borough Council’s handling of my FOI request ‘FOI regarding ‘Notifiable Incident’ notifications sent to OFSTED regarding Shamima Begum, Amira Abase & Kadiza Sultana’.

I note that you have not confirmed or denied whether the authority holds this information, and have not applied an exemption that would remove this obligation.

As you may be aware, Section 1(1) of the FOI Act (https://www.legislation.gov.uk/ukpga/200…) states that “Any person making a request for information to a public authority is entitled to be informed in writing by the public authority whether it holds information of the description specified in the request”.

I would be grateful if you could clarify whether or not this information is held, or specify which exemption of the duty to confirm or deny you are applying.

The following requests from my FOI:

Ouch! That must have stung!

There are many more twists and turns in the Shamima Begum story which we think will emerge over the next few months.

The SCR is key and is likely to crack this case right open. Stay tuned.

Earlier this week this story was published on the MyLondon site Shamima Begum’s school days: Students speak about ‘cool girl with terror badge’ but say ‘I forgive her for trying to recruit me for ISIS’. This was written by Chief Reporter Zak Garner-Purkis.

These three paragraphs from that story caused Moley and others familiar with the Shamima Begum case some concern.

“Due to the way the academy school system works, the local authority, Tower Hamlets, has never had responsibility for Bethnal Green Academy and therefore was unable to comment on what happened in 2015.

The autonomous nature of these schools also meant the Department for Education could not directly comment because academies are run and managed independently of government.

Therefore the only party who could answer the allegations made by the former students was the school itself.”

Email to Mr Garner-Purkis regarding his Shamima Begum story

“Dear Zac,
You state that the responsibility for the wellbeing of the Bethnal Green Academy (BGA) girls was related to the nature of the education establishment they attended. A local authority’s duty of care to children covers all children within the jurisdiction of that local authority full stop. An LA’s duty of care does not stop when a child enters its school and the duty is taken over by the school. Yes that school, be it an academy, a faith school or any other type has a specific duty of care to a child when it is attending that school but that does not replace the duty of care that an LA has to all children in its borough.

Tower Hamlets council had a duty of care to the BGA girls including Shamima Begum. It failed to carry out this statutory duty to safeguard.

Consequently Tower Hamlets council had a statutory duty to undertake a Serious Case Review (SCR) to examine what happened to the girls so that all necessary lessons could be learned. It has failed to do so.

As a result parents in Tower Hamlets have no idea who radicalised the girls or how this was achieved.

I am writing a story about the recent developments in the Shamima Begum case and will be making reference to your work. If you would like to reply to the above please do so. I may publish in advance of receiving your reply, in which case I will update my story when I receive your response.

Due to the nature of this case I have copied several local councillors and the LBTH press office for their information.”

As yet we have received no response.

Tower Hamlets council were also asked to comment but have not done so.

“In lieu of a serious case review, the council worked alongside the government’s Prevent team and the Police’s SO15 counter terrorism team to review events and provide comprehensive support to the school, its staff, parents, and pupils in order to investigate what had happened and stop others following in their footsteps.

“This work, which continues to this day, has been commended by the government. During our most recent Ofsted inspection in 2019, Tower Hamlets Council’s work to help prevent radicalisation was praised, inspectors confirmed that: “High-level risks of the radicalisation of young people are understood and recognised very well.”