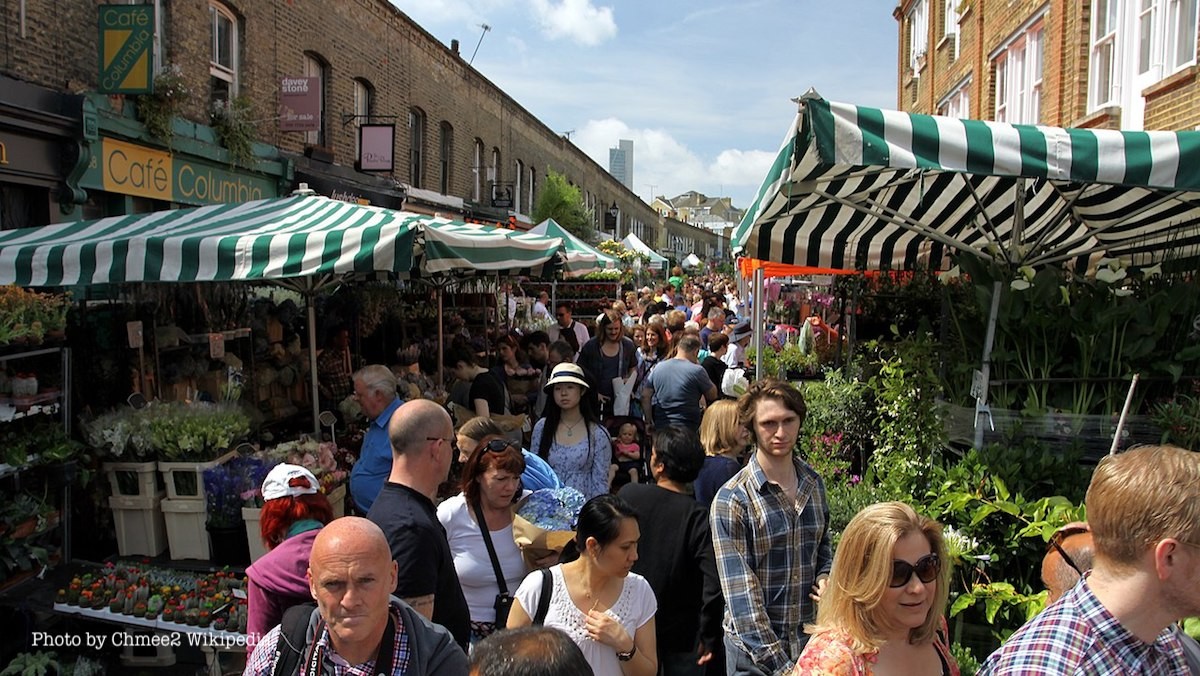 Not a collective decision made by the Labour Party cabinet members.

The very same Mayor who claims that decisions will not be taken by him alone but by cabinet members collectively.

This decision affects the following locations in and around the world-famous flower market.

Below you can see a map of the area with the areas in question annotated by a local resident. The same resident wonders just how locals will be able to get in or out on a Sunday when the restrictions are in place.

The conflict between the Liveable Streets evangelists aka Tower Hamlets Labour Party and local residents and business owners has been heated to say the least, irregularities in the way Equality Impact Assessments have been carried out (or not carried out) and access for emergency services being central to the fierce arguments.

The outsider might wonder why so many people are getting so angry about road traffic layouts? Is this just about cyclists versus cars and the devil’s spawn that drives them?

This is what LTNs are really about.

What Low Traffic Networks (LTNs) are about is democracy.

LTNs are about democratic representation.

LTNs are about local elected (usually Labour) councillors treating the very people who voted for them with utter contempt.

LTNs are about local councillors who lie to residents and continue to repeat the lie even when they are found out and exposed.

LTNs are about a vocal, well-educated minority imposing their will on the majority because they can shout louder.

The screen grab above of Labour Whip Cllr. Kevin Brady’s WhatsApp message, speaking on behalf of the Mayor we understand, shows two things.

One is that the claim that ‘there is certainly no plan to impose road closures on areas that don’t want it’ is a lie. Ask the people opposing Columbia Road LTNs.

The second is that neither he or the Mayor has any respect for residents, dismissing them as ‘self-appointed spokespeople’ who chat in ‘self-selected watsapp [sic] groups’ because they, in his opinion, do not represent community opinion’. You can read more on this here.

It seems that despite his words and actions Mayor Biggs really loves being a directly elected Mayor and he has not the slightest intention of relinquishing his grip on power.

To understand the hypocrisy of this Mayoral executive decision you really need to have some understanding of the fog of political manouevring that surrounds it – this is how many of the most important decisions in Tower Hamlets have been taken and will be taken in future.

‘Members will be making collective decisions rather than advising me’

To quote the Mayor

Which was all a bit odd.

No public debate about governance models

The collective pennies dropped when at a secret meeting of the Labour group of councillors only two weeks later the decision was made to have a referendum on 6th May 2021 repeating the same choice as the 2010 (rigged) referendum.

The governance model referendum on 6th May 2021 is to allow people to choose between the directly elected Mayoral system or the Leader and Cabinet model.

These choices are those of Mayor Biggs to further his own ambitions. Nothing else.

Leading who Together exactly?

In December 2020 a group called ‘Leading Together’ emerged saying it wanted to give power back to residents and it was a community led movement campaigning to bring back the Leader and Cabinet model to Tower Hamlets because it’s time to ‘return power back to our borough’.

Although Leading Together has cross-party political support it is essentially a Labour group which does the bidding of the current directly elected Labour Mayor.

The public face of the group is ex Labour Group Leader, ex Deputy Mayor and ex Labour councillor Rachel Saunders who is currently Education and Policy Director at Speakers for Schools.

The reason Rachel Saunders is ex so many things is that in August 2017 she resigned to make space for others after Ofsted found that the department she was responsible for, Children’s Services, was found to have left children at risk of harm and had she failed to turn up to a single meeting of the Children’s Safeguarding Board. A ‘triangulation’ issue according apparently.

The reason Rachel Saunders is running the Leading Together group is, according to sources and the bleeding obvious, is that she is on a promise from Mayor Biggs of a nice safe Labour seat (Mile End?) for her political comeback. The ideal person to front a campaign to ‘return power back to our borough’.

(Note: If power is not in our borough at the moment where is it? Anyone know?)

Stroke of a pen

What does all this political geekery have to do with Low Traffic Neighbourhoods / Safer Neighbourhoods and the Mayor’s Executive Decision, made at a stroke of his pen with no scrutiny behind closed doors?

It demonstrates that the only real issue at stake in the governance referendum is Mayor Bigg’s determination to hold onto power and bar the way for his predecessor, Lutfur Rahman, to make his political comeback.

If the referendum result is to ditch the directly elected Mayoral model then Biggs wins because he will be the Leader of the Labour Cabinet and still in charge.

If If the referendum result is to retain the directly elected Mayoral model then Biggs wins because guess what? He is still Mayor. And he has the executive power to make damn sure Lutfur Rahman will not get his job.

Recently Mayor Biggs has even let it be known that he may retire soon, in the hope that this will influence the vote.

Yeah, right. As clumsy attempts to put out rumours with no basis in fact in the hope that they will be repeated as truth this is a pretty lame attempt.

The governance model referendum is on 6th May 2021.

Will the result make any difference to ordinary residents? Probably not. But it might be interesting to try and see what happens.