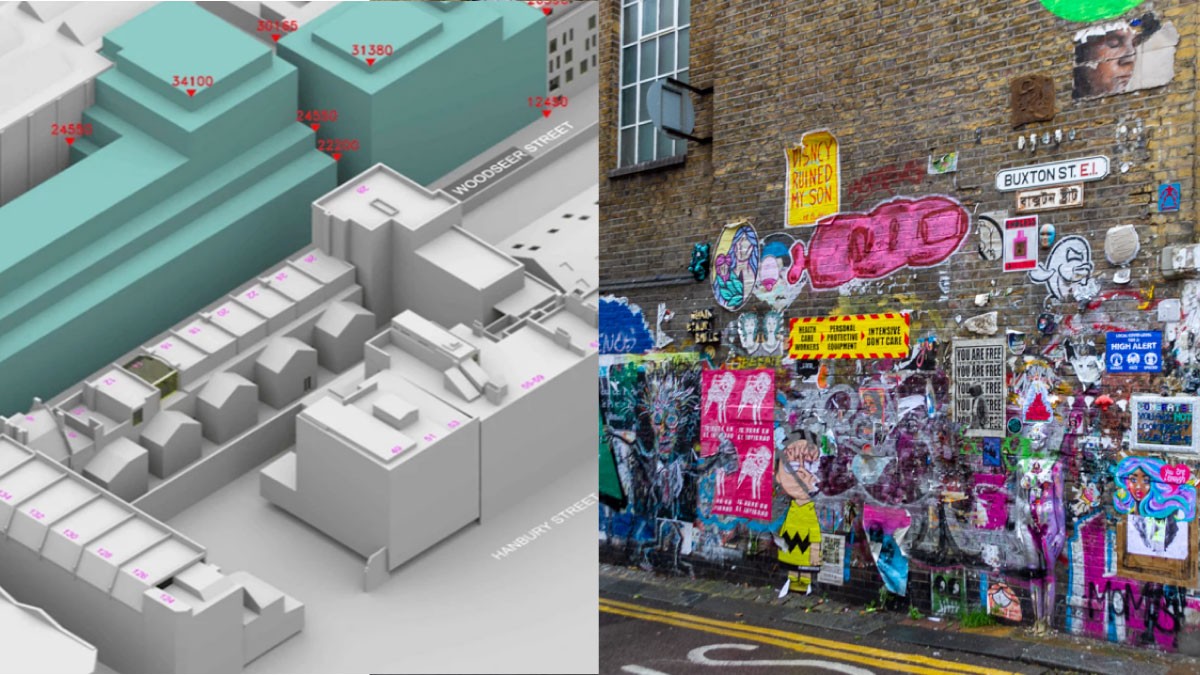 Brick Lane is iconic. It represents the East End and the Bangladeshi community. Anyone who suggests any changes to a national icon is in for a hard time as emotions and long-held memories are jarred.

The proposal for a new development by the owners of the huge Truman Brewery site has upset several people and has been condemned as ‘a short-sighted, poorly and insensitively designed scheme based on an antiquated business model.’ by Spitalfields Life.

And that is one of the more considered views against the project.

Towards the end of 2020 Cllr. Puru Miah (Labour, Mile End) who was born and brought up in Brick Lane published this open letter to the Truman Brewery.

This contains allegations that ‘persons acting as your agent have been harassing and intimidating local residents and businesses in order to garner support for your proposed planning application.

Given the previously good relations your estate has with the area, I find it difficult to believe that you are somehow directly involved in such matters, in what tantamount to “Gangster Capitalism”.’

Too right. The borough gangsters usually only emerge into the sunlight when an election is on.

A key part of the allegations related to Bangla Cash & Carry as there seemed to be the possibility that this business was being pressured in some way by people claiming to represent the Truman Brewery developers.

The Enquirer has not been supplied with any credible evidence that there is any truth in this allegation.

In September 2020 unknown individuals stood outside Bangla Cash & Carry collecting signatures for a petition, however there was a distinct lack of clarity as to what the petition was for or who was organising it.

The Enquirer got in touch with Steve Paton Head of Culture and Development at The Old Truman Brewery and he supplied us with this statement.

“The allegations came as a shock to us. We pride ourselves on our positive relationships with tenants and take seriously any accusations to the contrary.

We have therefore undertaken a review over the last four days, both internally and with third party suppliers. We have been assured by all parties that there is no truth in the allegations.

We are in ongoing discussions with Rafique Miah, the owner of Bangla Cash & Carry, about a longer term lease of his premises, and we fully expect to reach agreement. Bangla Town Cash & Carry is a tenant on a month by month basis and has been for some time (many tenants on the Truman Brewery site occupy under flexible tenancies and have been for many years).

Rafique and his family are valued long term tenants who we have been happy to support during this difficult, Covid-affected year with rent-free and rent-discounted periods. Bangla Town Cash & Carry has been serving its customers for 25 years and we very much hope and expect that they will remain tenants. I am sure that Rafique will vouch that the discussions have been cordial and constructive.

Moley was only informed of the people collecting signatures in December and was scurrying off towards Brick Lane to have a sniff around before he was told that this all happened in September.

Which ain’t no use at all.

At face value it seems highly unlikely that anyone from Truman Brewery would organise people to stand outside Bangla Cash & Carry collecting signatures for, er, something. Why would an organisation with the level of resources that the Truman Brewery presumably has at their disposal bother doing anything like that?

What this activity does smack of is of individuals who during elections, for their own reasons, decide to do some freelance work. Quite what their purpose is remains a mystery.

The Tower Hamlets Council website describes Brick Lane in the following terms and is never slow in coming forward to using it for PR purposes.

“Brick Lane is in the heart of the East End and is one of London’s most iconic streets. Historically it’s been home to French Huguenot and Jewish immigrants, and now it’s a centre for the Bangladeshi community.”

All true but the Enquirer wonders if anyone from the Council has paid a visit to this ‘iconic street’ of later?

Eight months must have passed since the Enquirer paid it a visit so we sent the Wapping Mole out to take some photos.

As a borough resident it pains us to report that every surface in Brick Lane seems to be covered in graffiti. It is quite incredible. Why anyone would want to visit Brick Lane is beyond us because it looks like a dump.

The graffiti is so bad that Moley almost abandoned his original assignment and considered just photographing the way in which a key part of our borough is being degraded.

Sleeves need to be rolled up

The Council needs to get its act together and clean Brick Lane up. Those who own or run businesses and restaurants there also need to roll their sleeves up, get some powerful jet washers working and get busy doing the same when lockdown regulations allow.

This is not to say that the current development proposals are appropriate, let alone be given planning permission, but anyone who is prepared to invest significant amounts of money in the area should be encouraged.

Residents and local businesses have had a good relationship with the Truman Brewery management in the past and there seems to be no reasons why this cannot continue in the future.

What cannot be allowed to happen is that Brick Lane becomes a place to avoid, not a place to live, work or visit.