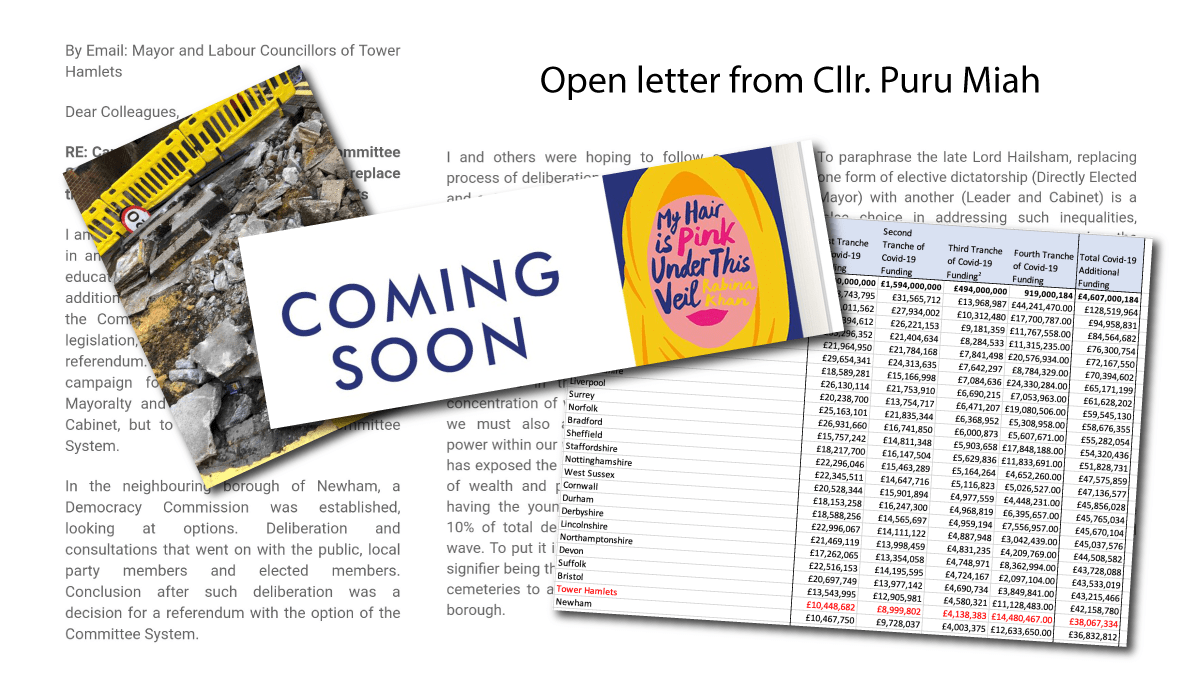 Why is there always so much politics in the Enquirer? What about the good old days of Love Wapping when either of its readers were just as likely to find some lovely photos of Kevin the Kingfisher as the details of some Emergency Motion?

Reality is that because of the nature of Tower Hamlets the way in which the council works (or does not work) has a much bigger influence on its residents than most local authorities.

The borough is still one of the most deprived in the UK with many people dependent to varying degrees on the council for social services for help with their daily lives.

Fortunately Tower Hamlets politics is amazingly complex and stories abound, ‘Storyville’ as Ted Jeory used to say. The entire editorial team, especially the Wapping Mole, would love to report on more good news stories but they have little capacity for anything but the essential stuff which affects the most people.

Here are some stories of the past week that we have not managed to fully cover elsewhere.

Big up to Cllr. Marc Francis (Labour, Bow East) and his Labour colleagues who put the Mayor’s decision to axe thousands from the housing waiting list (Housing Allocations Policy) under the microscope at the meeting of the Overview & Scrutiny committee on Monday 19th October by making it the subject of a ‘call-in’ procedure.

A ‘call-in’ is a way for councillors to ask for a decision that the council cabinet has taken to be looked at again.

Here’s Marc’s explanation of what the issues are with this.

“Our “call-in” asks the Mayor to think again about his plans to remove over a thousand residents from Band Three of the Choice Based Lettings scheme and also not to restrict the number of years homeless families placed in the private rented sector in other Boroughs can stay on our Waiting List. These changes go to the very heart of what kind of community we want to have here in Tower Hamlets. Are we a Borough that takes action to underpin its community? Or doesn’t that matter?

The importance of family

If we want to encourage families to stay, we have to be able to offer existing tenants in Band Three the chance of moving to a different place if they want to. Otherwise, we force people to leave. The coronavirus pandemic has shown even more not just the benefit of being near family but the absolute necessity of family and wider support networks. The irony is that every one of those families the Mayor has decided to remove would be giving up a flat or maisonette of the same size, so no-one loses out if they get the home they want.

Housing strategy probably not legal either

Similarly, the decision to restrict homeless families to just three years on our waiting list undermines our community. These are families who have established a local connection with Tower Hamlets. Casting them adrift in Newham, Barking or Ilford is not right. Equally importantly, it probably isn’t legal either, as the successful legal challenge to Lambeth’s same policy shows. We hope the Mayor will reflect upon these concerns and reverse his decisions.”

Thanks very much Marc!

Result was that the Overview & Scrutiny committee unanimously agreed with the call-in and has asked the Mayor to think again.

Key decisions and powers of call-in Centre for Public Scrutiny

Much cloak and dagger intrigue this week as the Mayor did a 180 degree about turn and decided that we would be better off without him! Well, without the nonsense of a Directly Elected Mayor. This change of heart was partially down to his latest scam to retain power as Mayor being rumbled so he thought he would have a go as retaining power as ‘Leader’ of the council.

Hold on there boy! Not so fast! Cllr. Puru Miah (Labour, Mile End) @th_puru wrote an open letter suggesting that the option of having a ‘Committee System’ in a referendum to replace the Mayoralty. Here it is. Lots more on this for months and months and months and…

“The true sign of democrats and democracy is to present all options, not just those that are convenient.”

The Queen of Watney Market, aka Cllr. Rabina Khan (Shadwell, Liberal Democrat), still fuming at Parliament voting to not provide free school meals during the holidays, tweeted that the Mayor should use some of the £38m Covid-19 money to pay for free school meals in the holidays. Don’t hold your breath on that one.

Here is a menu for the House of Commons subsidised restaurant. Steak and chips for a tenner? Maybe we should send the hungry children of the East End there for lunch?

Yup, Cllr. Rabina has written a book which is to be released in March. Moley has been trying to find out what it is about but knows nothing more than the title, ‘My Hair is Pink under This Veil’ which doesn’t help much. Could be worth a read.

#CoverReveal; Everyone has to check out @RabinaKhan's absolutely stunning 😍 cover of her new book #MyHairIsPinkUnderThisVeil!

Tower Hamlets has started its own ‘Track and Trace’ service as the government one is absolute rubbish. 12 billion quids worth of rubbish.

Short notice but if you love Arnold Circus, join Dan Cruickshank for a public protest at 10am this Friday 23rd October (TODAY!) at Boundary Estate, Shoreditch, to stop the council tearing up the historic paving and commencing works for pedestrianisation without completing the consultation.

Last week Tower Hamlets council started destroying the historic fabric of the paving at Arnold Circus before they had even completed the consultation or presented final plans to the residents. Friends of @Arnold_Circus want the work stopped.

When Moley is out and about in Wapping, his spiritual if not physical home at the moment, residents keep on asking him about Cllr. Abdal Ullah (Labour, Wapping & SKD). To be precise they usually ask two things.

(To be exact these are not the exact phrases used, Mole has omitted various East End endearments for decency reasons).

Answer to 1 is “Not round here as he is probably helping out a huge property developer ease some multi-million pound project through the LBTH Planning System which is perfectly legal” and Answer to 2 is “Unfortunately not”.

Well, not yet anyway. Moley has heard that Ullah seems to be very keen on trying his pet scheme related to Wapping Gardens yet again. He was told where to go last time on that one, same again now Abdal, OK? Now go along and play like a good boy.