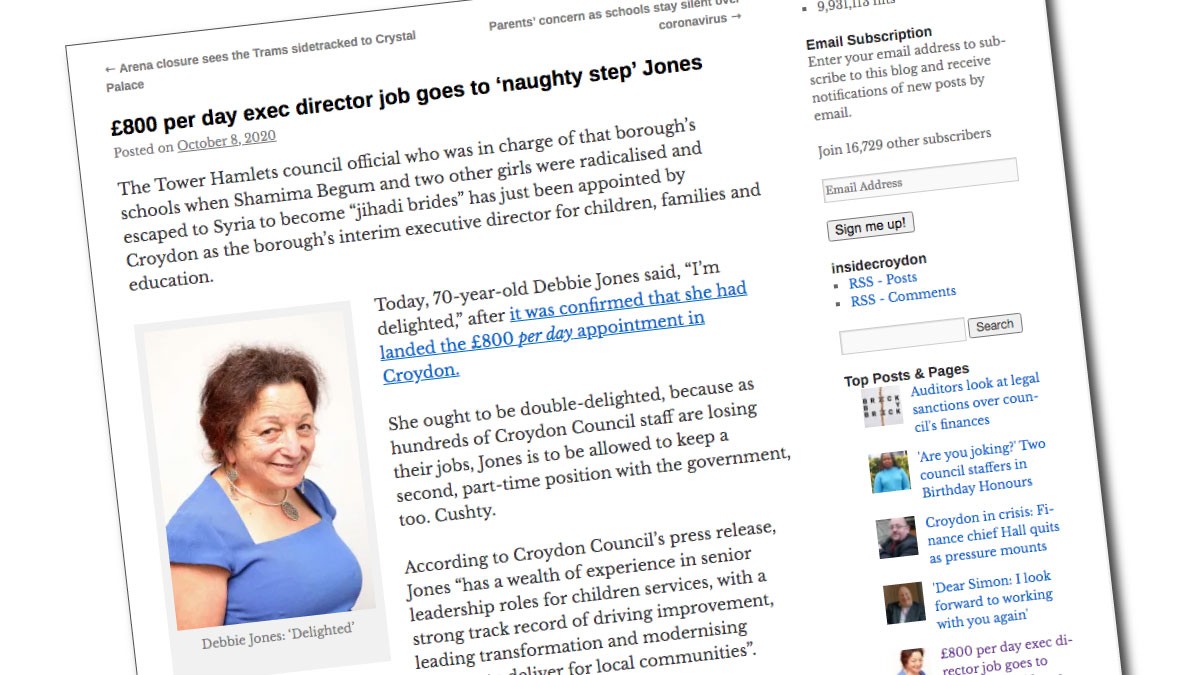 Moley loves Croydon. Honest. Mole was born and raised in Sarf Lunnun and enjoyed nothing more than burrowing his way to Croydon to browse the most excellent model making shops that could be found there.

Yes it seems that Debbie Jones, once Corporate Director of Children’s Services of our proud borough, has found a new job with Croydon Council. (Suck it up Danny, there is no way she is coming back now.)

Croydon seems to have a few problems although a bit different to Tower Hamlets council problems, one of them being that Croydon council has become the first to seek emergency financial assistance from the government because of coronavirus according to the Financial Times, and as recently as 27 August this year the BBC reported that Croydon Council ‘cannot guarantee’ avoiding bankruptcy as it only has £10m and has a £65.4m overspend for the 2020-21 financial year.

Moley thinks Debbie will feel right at home at Croydon Council although it is not as if hundreds of council staff are being made redundant there (Oh. They are?) or that the council was in crisis when the Chief Executive quit (Oh. OK.) or that the Chief Exec made things even worse by holding out for a bigger pay-off (Er… right.)

Back to the most excellent story by Inside Croydon which says ‘Extraordinarily, under Jones, Tower Hamlets failed to conduct any serious case reviews into the three girls who were radicalised at Bethnal Green Academy.’

Here we have to take issue with Inside Croydon.

Was it extraordinary that Tower Hamlets council did not conduct any Serious Case Reviews into the Bethnal Green Academy girls?

Nah. It was business as usual in Tower Hamlets.

What Inside Croydon fails to realise is that there was no way the incoming Mayor John Biggs was going to allow Serious Case Reviews to go ahead when he had just taken over from disgraced former Mayor Lutfur Rahman.

Think of the embarrassment of the borough once more being mentioned in the same breath as ISIL / ISIS / lunatic extremist terrorists just as Mr Clean takes over! Whatever next! Corruption at the town hall? In your… oh, right.

Has Moley ever mentioned that Debbie Jones is namechecked over 20 times in the Poplar Papers? No, oh well.

Downright politically inconvenient, that’s what Serious Case Reviews would be. Well, these ones certainly would be. Sure there is the teeny weeny issue of nobody ever knowing to this day how the Bethnal Green Schoolgirls were actually radicalised so that steps could be taken to stop them doing it again.

So Croydon all we can say is really, really sorry you ended up with Debbie “Naughty Step” Jones on the payroll. Fortunately Whitehall has imposed new Chief Executive Katherine Kerswell on Croydon council so she can kick arse and take some names.

Oh and Katherine, you might want to see which of Debbie’s former colleagues from Tower Hamlets she recruits in future. Just saying, right?

Quite why Whitehall has yet to take control of the London Borough of Tower Hamlets again is beyond Moley. Politically inconvenient maybe?

Or is Croydon just that much more appealing to the Department of Housing, Communities and Local Government commissioners than Tower Hamlets?