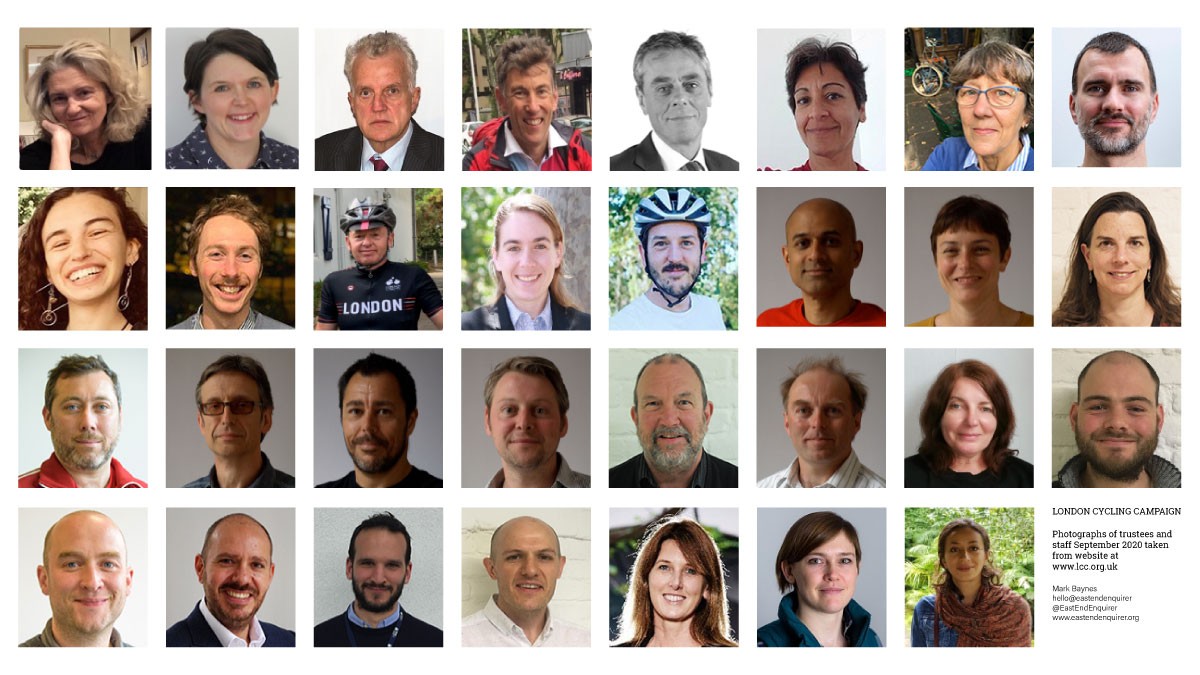 Look at the image above. The 33 people shown are the trustees and employees of the London Cycling Campaign, one the groups who are so vocal in their support of Liveable Streets and Low Traffic Neighbourhoods (LTNs).

Simple question. How can London Cycling Campaign (LCC) genuinely believe they are representative of London?

LCC states that its goal is to “make sure that everyone who cycles, or wants to cycle, has a voice in Greater London”.

If this is true how is it that only 2 out of 33 of its people seem to be BAME?

How does LCC have any idea what the barriers to cycling might be for a Muslim woman living in Mile End?

At a wild guess LCC has not got clue one.

EEE emailed LCC asking for their comments on this issue and was eventually directed to their Black Lives Matter page which is worth a read.

There is lots of stuff here which seems to be genuinely felt. The bottom line is something we already knew:

“That said, we know that the cycling community is not reflective of London’s population as a whole as regards their gender, age, disability, ethnicity, or income. Its reputation as an overwhelmingly white activity is deserved.”

And some we did not.

“According to 2016 figures from TfL, Black, Asian and minority ethnic (BAME) groups account for 15 percent of current cycle trips, but 38 percent of potentially cyclable trips. Cycling spaces are often very white and this makes them unwelcoming for black people and other ethnic minority groups.”

How then does LCC understand the issues surrounding cycling in an area targeted for the Liveable Streets treatment which has a high number of Muslim residents?

The LCC Annual General Meeting minutes for 2019 have not been published. EEE searched through the earlier AGM minutes and found no mention of ‘diversity’ until the 2015 AGM.

“Equality and diversity – we have done well in recent years to reduce the gender imbalance on the Board, but there is more still to do we still do not reflect the overall diversity of all Londoners. In particular, it would be good if the number of female LCC group leaders doubled within a year.”

This seems to have been copied and pasted from 4.3 of the 2014 AGM minutes.. To be fair the 2014 minutes does mention diversity a few more times (six to be precise) relating to the LCC’s commitment as a charity to diversity and equality, but primarily with regard to gender imbalance.

The LCC site states that the Black Lives Matter statement is not just a tick box exercise.

If true how is it that LCC seems to have done nothing to change its own diversity or reach out to Londoner’s who are not White, middle class and male?

This perception of cyclists was based on this author’s personal experience, but EEE was surprised to find research that says this is true. Have a read of this article, Why are London cyclists so white, male and middle-class?

Is the reason for including the Black Lives Matter statement more to do with ensuring that LCC appear to be campaigning to end racism and injustice in all its forms ‘cos if LCC don’t there is no way in the world they will get contracts or sponsorship? In other words its about the money.

LCC staff costs were £586,000 for the financial year ending March 2020, total income £1,077,903 according to audited accounts 2019-2020. (Note: page 16 states that a priority for the next financial year ‘is to quantify the lack of BAME participation and representation in LCC at all levels and identify ways in which this can be improved’.)

Across London numerous pressure groups such as LCC seem intent on imposing their two-wheeled view of the world on everyone else via their network of local activists.

On the LCC ‘Beat the bikelash’ page you will find, amongst other gems, these words: “Do not let councillors simply sit back and echo whatever resident views emerge on a scheme.”

A little further down: “In advance of schemes going in, council leaders, cabinet leads, official social media channels and ward councillors need to be out explaining why the scheme is important, what it aims to do, and how vital it is residents get behind it.”

Maybe this is because London cyclists reflect you, LCC? Or is it that LCC reflects London White cyclists?

Bottom line is that LCC should get its house in order before it continues to tell Londoners – including the several million who are BAME – what their neighbourhoods should look like, cycling around telling local communities what is best for them. A two-wheeled nanny.

LCC has every right to promote cycling as a great way to get around (some parts of) London. That is what registered charities do, they campaign for stuff to happen.

31 White people, however well intentioned and genuine their beliefs, do not have the right to campaign for Londoners of any ethnic makeup to change their communities to the way LCC thinks is best for them.

LCC does not have the right to project their beliefs onto others, LCC does not represent Londoners. Our elected representatives would be wise to remember this.