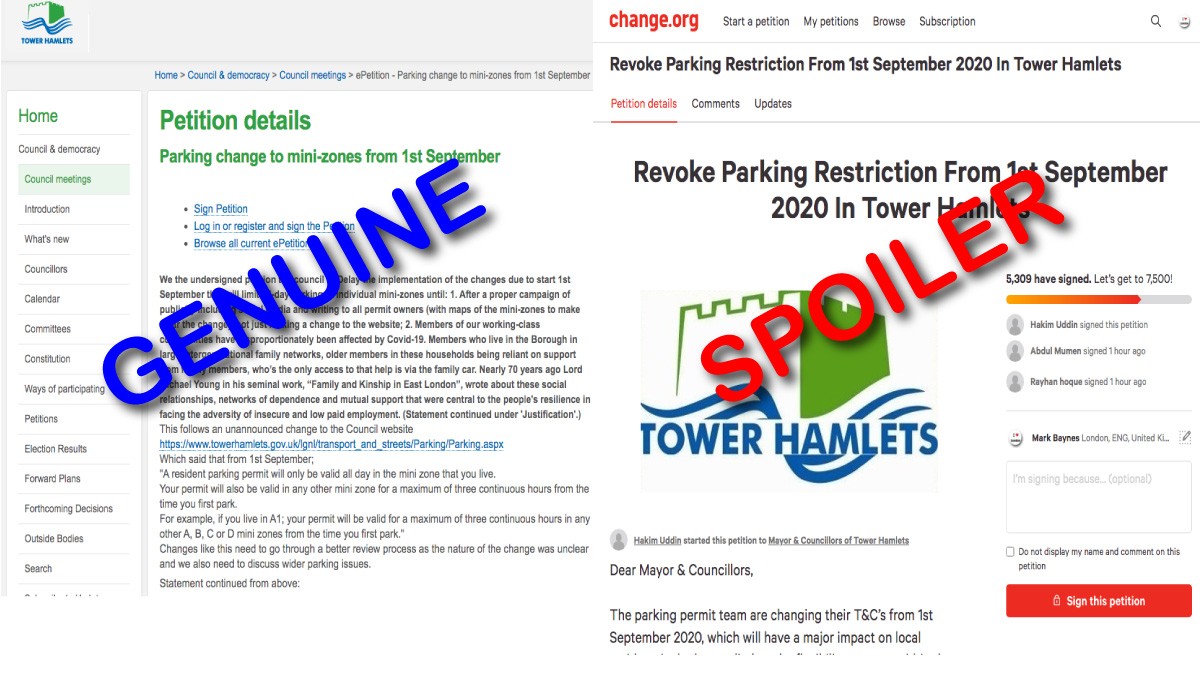 Only in Tower Hamlets could someone be so petty – or so dishonest – that they would interfere with the democratic right of residents to trigger a council debate by signing a petition.

There are currently two e-petitions against the recently announced (discovered by accident?) change to parking restrictions in the borough which has caused more than a few adverse comments.

The first petition on Change.org Revoke Parking Restriction From 1st September 2020 In Tower Hamlets is doing rather well with 5,236 out of a very ambitious target of 7,500.

The second petition Tower Hamlets Council – ePetition – Parking change to mini-zones from 1st September is on the LBTH council site and has 844 out of the 2,000 target.

So far so what? Two petitions must be better than one and the number of signatures reflects the strength of feeling over the changes to the car parking rules so it’s all good. Isn’t it?

Trouble is that Moley has been very reliably informed that the Change.org petition was established purely as a spoiler for the LBTH petition.

Here’s the thing. Only the Tower Hamlets council site petition has any real power to change anything because if it hits 2,000 signatures then the council has to treat the car parking issue very seriously indeed.

Because it’s the law. Section 11(1) of the Local Democracy, Economic Development and Construction Act 2009 defines procedures for a council to set up an e-petitions scheme.

If a petition on the council site hits 2,000 signatures it automatically triggers a council debate on the issue. If it hits 1,000 signatures the petitioner(s) may ask for the Chief Executive or an Executive Director to give evidence at a relevant Policy and Accountability Committee meeting. (Full details of the LBTH Petitions Scheme can be found here.)

A Change.org petition will have a higher profile than an identical one on LBTH because Change.org is a massive operation and reminds everybody who has ever signed a petition that there is another one they might like to sign.

Because of this the spoiler petition on Change.org will suck in signatures from residents who want the car parking changes to be debated but who quite understandably don’t realise there are two petitions, not one. So they sign the Change.org petition and have the exact opposite effect to what they intend – Tower Hamlets council avoids any meaningful debate on the changes to parking.

Same idea as splitting the vote in an election by standing a ‘paper candidate’ who has no interest in winning but in standing can ensure their opponent loses because it is impossible for them to win enough votes.

So who might have a motive to do such an underhand thing? Who is so afraid of losing their argument in favour of the car parking changes that they would indulge in such childish behaviour?

Any guesses? Mole has been very reliably informed that the idea to do this came from none other than Cllr. Asma Begum (Labour, Somewhere in Bow) who suggested that an innocent party should create the spoiler petition.

That’s Cllr. Asma Begum who is Deputy Mayor and Cabinet Member for Community Safety, Youth and Equalities.  That’s Community Safety as in all things policing, law and order and fighting hate crime. You know, the obeying the law and be nice and honest stuff.

EEE approached Tower Hamlets council for a comment on this and asked if Cllr. Asma Begum was indeed responsible for the spoiler petition but, as usual, we have yet to receive a reply.

Apart from the whole breaking the Local Democracy, Economic Development and Construction Act 2009 thing which is probably, er, against the law, this attitude by an elected representative further throws into doubt all and any consultations Tower Hamlets council has undertaken.