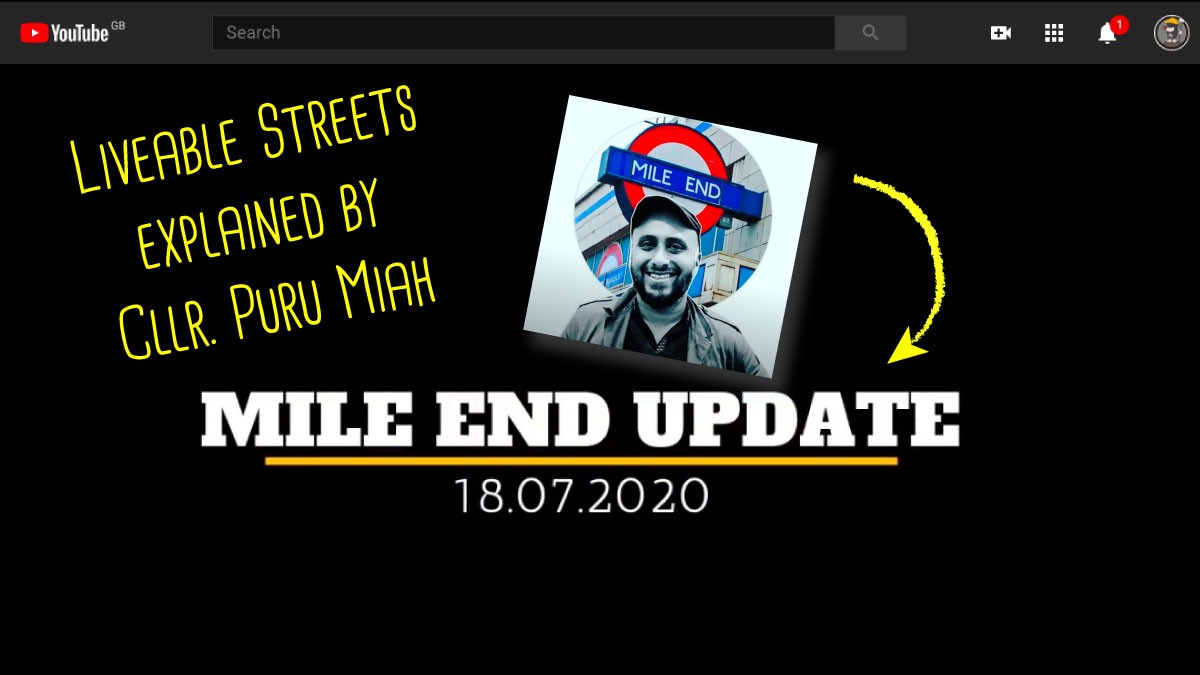 Cllr. Puru Miah (Labour, Mile End) wins the East End Enquirer Best Video of the Week award for his excellent YouTube video which clearly explains what the ‘Liveable Streets’ program is really about and suggests a way forward.

Seems Cllr. Puru has been as surprised as us at the huge number of comments about the now infamous ‘Slew Bridge’ post we published during the week.

There have been more comments on EEE, Facebook and Twitter than any story we have published – ever.

Have a watch to find out why then read on.

Good innit? There is more context on Puru’s Facebook page.

As mentioned in the video Puru has also written a Letter to Mayor Biggs about the ‘Liveable Streets’ Program.

In the letter (which you should read in full) Cllr. Puru calls for the roll-out of the program to be put on hold until an Equality Impact Assessment to be carried out with a particular focus on Socio-Economic Inequalities.

This is for the simple reason that it is the poor who are suffering from schemes like Liveable Streets – oh and they get to pay for them too! Nice.

This extract from the letter is worth reprinting in full.

In addition, I would like to bring to your attention to a recent report by the Institute of Race Relations, the ‘London Clearances’ which on a policy basis look at approaches to regeneration in London for the past decade which has resulted in the dismantling of working-class and BAME communities throughout London.

“Regeneration’ appears to be directed at the wholesale physical dispossession of BAME and working-class residents from council and other forms of public housing. This perfect storm of mutually-reinforcing policies is now being brought to bear on a new generation of young black people.”

(As a direct result of reporting on the Labour councillors who hide their property details on their Register of Interests  despite living in Bow, the Wapping Mole has found some very interesting facts about the Roman Road area which he will publish soon. )

For many of the same reasons that Covid-19 has disproportionately impacted the Black, Bangladeshi and Somali ethnic minorities, schemes such as Liveable Streets – if not implemented correctly – hit members of the BAME communities harder than people who are white.

Uncomfortable to read for some but at one level it is that simple.

And guess what? Tower Hamlets has lots of people from Black, Ethnic and Minority Ethnic (BAME) groups. Anyone noticed that?

The Institute of Race Relations, ‘London Clearances’ report reveals how ‘regeneration’ projects are being used to actively dispossess working-class and low-income families of their homes. Essential reading.

Not only that but the IRR report author Jessica Perera also says that “This process, often referred to as ‘social cleansing’, has previously been understood as a class issue. But the fact that BAME families are over-represented in social housing in the capital and highly racialised language was used to describe London’s post-war housing estates in the aftermath of the 2011 riots, would strongly suggest, the IRR argues, that this is also a race issue.”

Which explains why Liveable Streets has caused so much discussion. Ordinary working class people – of all backgrounds and colours – are worried that it is yet another way to force them out of their communities.

Liveable Streets is not about bikes versus cars it is about the wholesale cleansing of communities.

Which is why Cllr. Puru quite rightly calls for a pause on the Liveable Streets implementation and an Equality Impact Assessment with a particular focus on Socio-Economic Inequalities.

As he says “The main function of a local authority and its political decisions is not to replicate the inequalities produced by our economic system, but to mitigate against them.”

That a Labour council needs to be reminded of this speaks volumes.

Talking of which there are some interesting looking books in Puru’s video if you are a political geek. Or want to become one.