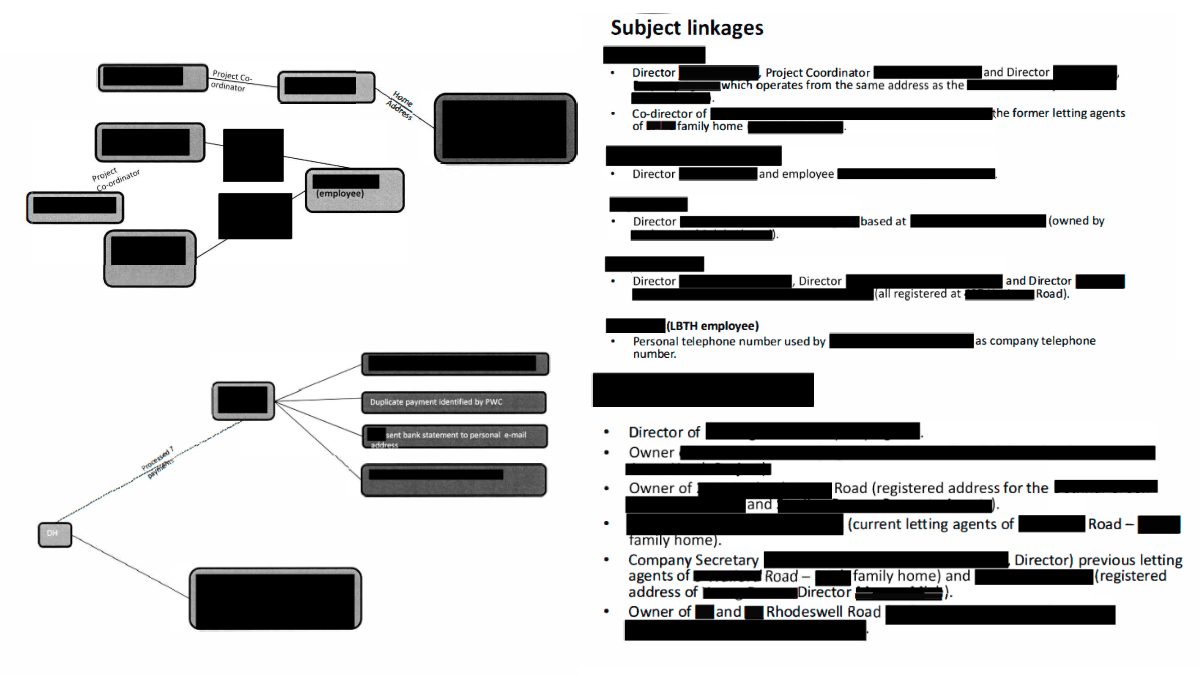 Apparently it is Friday in Lockdown London so here is some information free content for your weekend reading pleasure, all you need do is look at the pictures to be honest.

The Poplar Papers witness statement and evidence bundles were extensively redacted before being released to the media so it is quite tricky, sometimes impossible, to work out who was doing what with who inside the London Borough of Tower Hamlets (LBTH) Youth Service.

No evidence of social distancing here

What is not shown (we are reasonably sure) are the connections between these different network entities and politicians in the administrations of both Mayor Lutfur Rahman and Mayor John Biggs.

Several of the people identified in these networks have never been properly investigated, were never subject to any disciplinary action of any sort and are still LBTH employees.

Yes, you read those last few words correctly. They remain in post at the Town Hall. Some have even been promoted.

Which is odd don’t you think?

Even more worryingly some have left the council but are now believed to have been employed by organisations linked to the council. Sort of returning by the back door.

One individual. Habibur Rahman, was dismissed from his post. But then had this reversed by a Labour councillor and welcomed back with open arms.

Warms the cockles of yer heart, don’t it?

The key to this chart (top left of image) shows the extent of these networks.

These charts may have been compiled by Mazars, the external audit company employed to carry out some of the investigative work in conjunction with internal forensic investigators such as Mr Edmunds, but this is unclear.

This chart shows the links between different network entities. Problem is that because of the redaction neither the Wapping Mole or yourselves have any idea what type of entities these are and certainly we have no specific knowledge of who (or where) the individual nodes refer to.

Sorry about that but Moles do have to work in the dark. It’s what Moles do.

Another link chart showing connections between different LBTH employees and the organisations created for the purpose of fraud and their registered addresses.

This chart may also show connections to the organisations that never existed but still seemed to be able to apply for, and obtain, grant funding from Tower Hamlets council.

Because of a systematic failure of corporate governance within the council it was possible for a LBTH employee to dream up an organisation which only existed in there imagination and divert funds to it with only the details of a bank account.

Not the bank account of the organisation of course as fictional companies don’t have them. Any old bank account would do.

Apart from the issue of how extensive fraud involving we estimate millions of pounds of public money could be undertaken over many years in different administrations without being detected there is also the issue of how and why the people involved have never been punished.

It is no surprise that these people were not called to account under the administration of Lutfur Rahman were many (but not all) of these scams were undertaken.

What is baffling is why they were not called to account under the current administration of John Biggs?

Our current Mayor has twice been elected on a ‘Mr Clean’ ticket because he and only he could be trusted to clean up the borough. Look, he said so!

“When I was elected I was very clear, and am absolutely clear, that I will have no time at all for dishonesty or corrupt behaviour.” Mayor John Biggs.

One of his first tasks was the establishment of a ‘clean up’ project to identify all the naughty people. So what happened?

The Wapping Mole would like to apologise for the length of time it is taking to explain all this to you, we are now at Poplar Papers 10 and we are not finished yet.

Stick with Moley please and we can guarantee that your patience and interest will be rewarded.

Who knows, the Poplar Papers could take so long to explain that the Ministry of Housing, Communities and Local Government might even have taken control of the London Borough of Tower Hamlets by then.

Unlikely. Maybe the Ministry is just ignoring the problems in our borough in the hope they will just vanish? Sure they are well busy with the pandemic but this is important stuff too.

This is where we live.