Wapping residents reacted with fury yesterday as a crowd of people gathered outside the Turner’s Old Star pub in Watts Street E1W drinking alcohol bought from the pub.

Numerous calls were made to the police and reports made using the online possible breach of coronavirus (Covid-19) measures form.

Police officers responded very promptly, within 15 minutes by some accounts, and talked to the licensee and customers drinking outside.

Off premises sales only

The home page of the Turner’s Old Star website clearly states that “We are open for Off Sales only from 1pm to 6pm. We have the relevant licence and council permission. Please observe social distancing and disperse once served.”

Despite this claim several witnesses saw people coming out of the Star with alcohol in pint and half glasses. 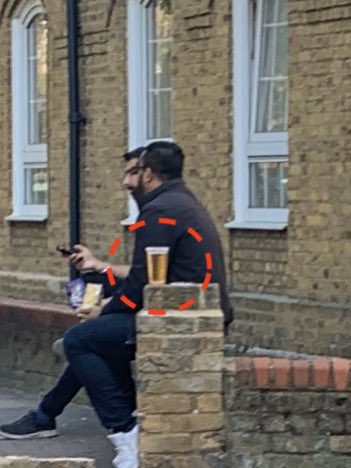 According to the Brewers Journal “A simple rule of thumb is that if you’re selling alcohol in a sealed container (usually a can or a bottle) to be taken away from the premises and drunk later, that’s an off-sale. If you’re selling something in an open container for immediate consumption, that will be an on-sale.”

“…so called residents of Wapping”

It was later claimed by a gentleman claiming to be the son of the Star’s landlord that a video tweeted by a resident about the issue should be removed and that strict distancing was in place.

This photo would seem to indicate that safe distancing was not in place outside the pub.

A later post said that “The beer was served in cartons and was put in the beakers by residents. Listen I appreciate the concern, these so called residents of wapping, it’s a shame they don’t take pictures of people dealing drugs outside there flats, but got the balls to report this.” 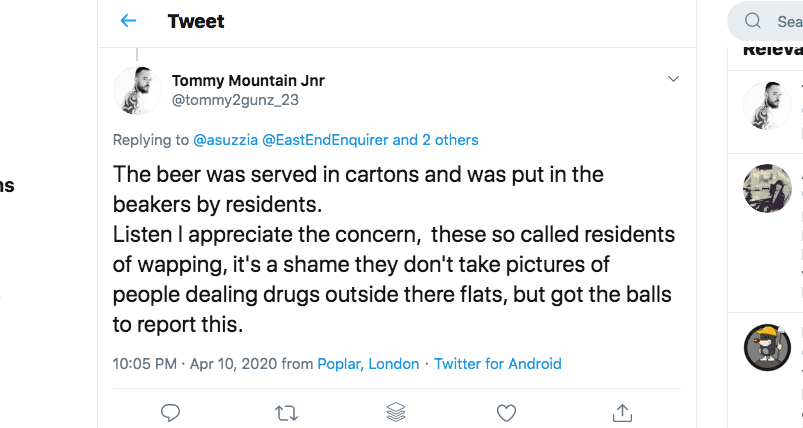 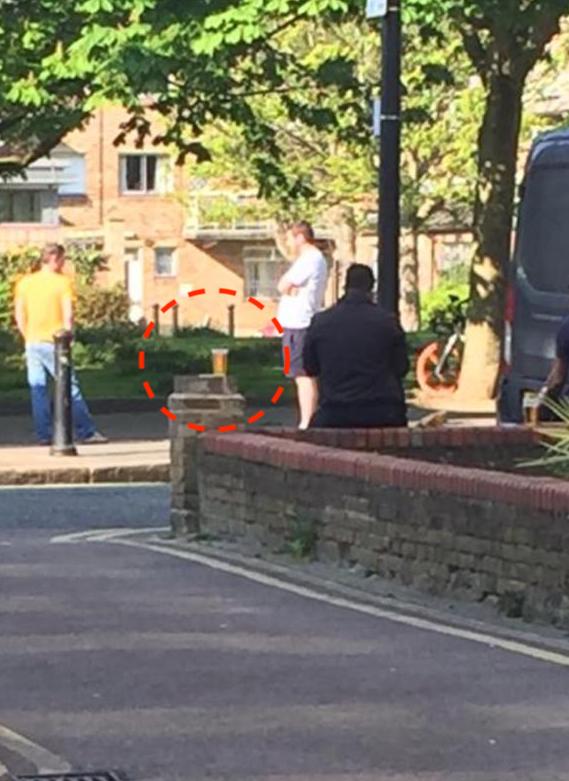 If you look closely at the photo above it does seem that the alcohol is in a plastic beaker.

Here are the photos sent to us by residents. If anybody has photos of the cartons the alcohol was sold in and the complementary plastic beaker do send it in.

Update: Since first publishing this story a a keen eyed reader has spotted three traffic cones blocking the road outside the pub in this photo. What sort of off-licence does that?

“The new powers to enforce social distancing sit with the police.

Our licensing team has spoken to the licence holder and voluntarily closed the premises.

The pub was selling takeaway food and alcohol in sealed containers but customers were opening them and drinking in the street.

We will monitor this and other locations in association with the police whose resources at full stretch as you can imagine at this tough time.”

At high risk from immune condition

A local resident that the East End Enquirer contacted via Twitter explained that they had not been outside for weeks because of an immune condition which puts him at high risk.

“I’m so annoyed because this was the very reason I didn’t want to go out. I’ve managed to stay in for so long but I needed milk and it didn’t come with my delivery slot and then I thought I’d use up my exercise time with it,” he said.

“The first time I’ve been out to exercise in weeks and I was fuming. Had to walk in the road to avoid people [outside Turner’s Old Star.”

“I walked past & he [the licensee] was not selling take away food & he may very well have been selling sealed containers (I didn’t see that) but he was also definitely selling draught beer. People were coming back for more when they finished their beer.”

“What’s it got to do with you anyway…
What was you sunbathing while taking photo’s or you don’t even live in wapping..
With your fake Twitter account you probably started up today cos your bored…”

“Great response. it’s got lots to do with me; this affects us all. I also happen to have family working in the NHS, risking their lives that cannot live with their loved ones & are working their guts out. They’re not worrying about making a few quid on a bank holiday weekend.”

Wapping Green today, all round Wapping next week.

The East End Enquirer spoke to an NHS worker whose colleague had died the previous day after they became infected with coronavirus in the course of their work.

That persons views of what was happening at Turner’s Old Star are not printable.

Another local resident, also a frontline NHS worker, was furious. He agreed to be quoted provided we did not publish his name.

“How dare these people do this? I was told they had an off licence – but customers were going into the Star and coming out with pints which they drank in groups outside,” he said. “I watched the whole thing and at no point did the landlord make any attempt to move people on. All he cares about is money in his pocket.”

One well known elderly Wapping resident who cannot leave her flat until the coronavirus emergency is over was in fear of her life.

“Don’t they care? Don’t they know that one of them could kill me if they have the virus?”, she said.

Turner’s Old Star, Tower Hamlets Council and the Licensing Department have been contacted for comment.

A mile up the road from the Turner’s Old Star is the Royal London Hospital. As you read this patients are dying after becoming ill with coronavirus.

They are not statistics, they are mothers, fathers, daughters, friends, colleagues. They are people we know.

Thanks to the incredibly brave National Health Service workers – doctors, nurses, cleaners, CT scan technicians – many more people will be saved and will live.

The reason the government has told us all to not go outside, not gather in groups and maintain a safe distance is to reduce the numbers of people who get infected.

This is the same reason the government has closed down all places of entertainment – including pubs.

What gave the people at Turner’s Old Star the right to ignore the rules the rest of us abide by?

If you witnessed what happened outside the Turner’s Old Star yesterday you should contact Tower Hamlets Licensing officers via email licensing@towerhamlets.gov.uk

If you found this story useful please consider helping the Wapping Mole and the East End Enquirer continue to cover issues like this by clicking the PayPal donate button below.(You can also pay by debit cards using this link).
Coronavirus, News